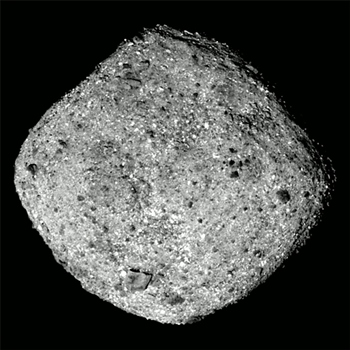 Closing in: the latest view of asteroid Bennu from OSIRIS-REx

Launched in September 2016, it is now less than 20 kilometers from the sunny side of the 500 meter-wide orbiting rock, with equipment on board the craft set to begin a preliminary survey.

Having slowed down on its final approach, OSIRIS-REx will start to orbit Bennu by the end of this month, eventually coming as close as 1250 meters from its surface. Early next year the mission’s lidar and mapping equipment will begin a global survey to determine the best site for sample collection.

After that collection site is identified, the spacecraft will - in around two years’ time - briefly come into contact with the surface of the asteroid to retrieve a sample before heading back towards Earth, where is it scheduled to arrive in September 2023.

Natural resources
Overall, the mission is designed to help investigations into planet formation and the origin of life, as well as improving our understanding of asteroids that might end up on a collision course with Earth.

“Asteroids are remnants of the building blocks that formed the planets and enabled life,” says NASA. “Those like Bennu contain natural resources, such as water, organics and metals. Future space exploration and economic development may rely on asteroids for these materials.”

“The OSIRIS-REx team is proud to cross another major milestone off our list - asteroid arrival,” added Dante Lauretta, the mission’s principal investigator at the University of Arizona, Tucson.

“Initial data from the approach phase show this object to have exceptional scientific value. We can’t wait to start our exploration of Bennu in earnest. We’ve been preparing for this moment for years, and we’re ready.”

Photonics kit
NASA says that the OSIRIS-REx mission marks several firsts in space exploration. As well as being the first to return asteroid samples back to Earth, it will be the first to study what is known as a “primitive B-type” asteroid – meaning that it is rich in carbon-based organic molecules that form the building blocks of life.

It is also the first mission to study a potentially hazardous asteroid and try to determine the factors that alter their courses to bring them close to Earth. 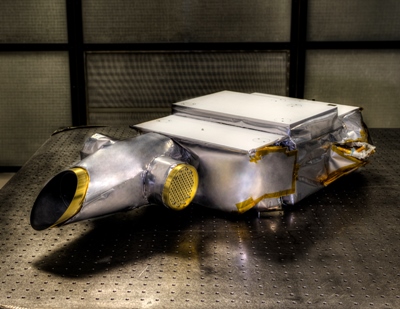 Searching for signs of life: the OSIRIS-REx visible-infrared spectrometer

Among the on-board scientific instruments that will characterize Bennu are three different cameras, a laser altimeter incorporating a lidar scanner, a visible-infrared spectrometer to identify minerals and organic material, and a thermal emission spectrometer to provide both mineral and temperature information.

The “PolyCam” instrument has already been deployed on the flight, using its 8-inch telescope to generate high-resolution images from as far out as 2 million kilometers.

The “MapCam” is now being used to generate a four-color map of the asteroid's surface and help identify a suitable sampling spot. Christian Drouet d'Aubigny, a camera scientist from the Arizona team said in a Q&A on the institution’s web site:

“As we go past the asteroid and see different parts, we will point the spacecraft in various directions, take mosaic images and stitch them together.”

Extreme close-up
Once OSIRIS-REx gets into close orbit, it will switch back to the PolyCam to take some “extreme close-up” shots of Bennu. “The closest approach will be when we do our reconnaissance passes at 200 meters above the surface,” added d'Aubigny.

“At closest approach, the field of view comes down to a three-meter square, or approximately the size of a bedroom, and with enough resolving power [for us to] see a pea on a table.”

Once the sample collection part of the mission is in progress, which is expected in a couple of years, the third imager, or “SamCam”, will be used for rapid imaging and checks on the sample collector mechanism as OSIRIS-REx approaches and then makes physical contact with the asteroid.

The University of Arizona has been closely involved in the development of many of the cameras and scientific instruments on board the craft, with Lauretta and colleagues leading the science team and the mission’s science observation planning and data processing work.

Rich Burns, the OSIRIS-REx project manager at NASA’s Goddard Space Flight Center, said in an agency release: “During our approach toward Bennu, we have taken observations at much higher resolution than were available from Earth.”

“These observations have revealed an asteroid that is both consistent with our expectations from ground-based measurements and an exceptionally interesting small world. Now we embark on gaining experience flying our spacecraft about such a small body.”