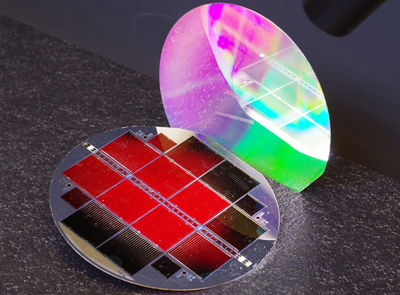 Researchers at the Fraunhofer Institute for Solar Energy Systems (ISE) have been conducting cutting-edge research in photovoltaics for 40 years. The institute has continually achieved “record” cell efficiencies in different material classes and made important contributions in reducing the costs of solar electricity, which is the cheapest form of energy generation today.

Photovoltaics, along with wind energy, is the central pillar of the energy transition. Aiming to further reduce the area required for PV installations as well as material use, ISE is focusing on tandem photovoltaics. The Freiburg researchers have once again succeeded in setting a new world record with a monolithic tandem cell made of III-V and silicon semiconductors.

In the new cell, the III-V semiconductor layers are connected directly to the silicon sub-cell on the atomic level. From the outside, the record cell resembles a two-terminal conventional solar cell. This two-terminal cell achieves the same efficiency as the best four-terminal solar cells with mechanically stacked structures, as published jointly by NREL, CSEM and EPFL in 2017.

“The use of a new compound semiconductor (GaInAsP) for the middle cell was a key step in our success in achieving the improved efficiency value,” said Patrick Schygulla, doctoral student at Fraunhofer ISE. “The new material allowed us to further improve the lifetime of the charge carriers and thus achieve a higher cell voltage. It's great to see how our material development has successfully contributed to improvements in III-V//Si triple-junction solar cells.” 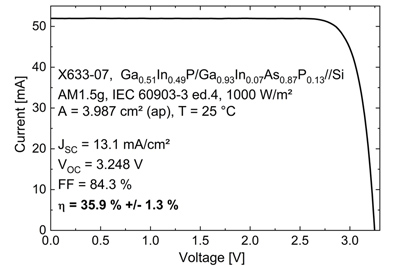 This is due to the complex epitaxy step of the III-V layers and the many additional semiconductor processes required to manufacture the cells. The researchers at Fraunhofer ISE are working intensively to make the production more cost-effective in the future and thus also address the terrestrial photovoltaic market.

“Combining III-V semiconductor materials on silicon is one of the approaches that we are pursuing with tandem structures (i.e., the combination of different high- performance materials) in order to achieve higher solar cell efficiencies,” said Prof. Andreas Bett, institute director of Fraunhofer ISE.

“It will be a few years before any PV modules made from the type of solar cell presented here are available on the market; however, this is an important, forward-looking path in the context of the photovoltaic expansion which is necessary for a sustainable energy supply.” 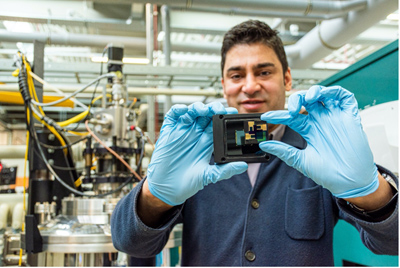 When combined in a four terminal tandem configuration with an efficient Panasonic crystalline silicon (c-Si) cell or with a Miasolé flexible CIGS cell, delivers new record power conversion efficiencies of 28.7% and 27.0%, respectively.

Tandem technology offers a viable and attractive route to increase the efficiency of commercial solar cells and modules. Four terminal tandems allow to build on experience and practices already available in the industry.

In addition, four terminal perovskite/c-Si tandems can be applied broadly and are, for example, very beneficial in combination with bifacial c-Si solar cells which, depending on the actual albedo, can readily achieve a total power generation density as high as 320 W/m2. For this breakthrough, the expertises in perovskite solar cell processing and performance optimization of Solliance partners TNO, imec/EnergyVille and TU/e were combined to develop an efficient and highly near infrared transparent perovskite solar cell with an efficiency of 18.6%.

This perovskite solar cell was combined with different architectures of bottom solar cells and even with different cell technologies, which demonstrates the wide applicability of the 4-terminal tandem approach:

“This performance was achieved by tuning the opto-electrical properties of the perovskite solar cell to better match the optical properties of the bottom cell,” said Dr. Dong Zhang of TNO/Solliance. “Next, we determined the loss factors in the four terminal configuration and minimized these step by step. Finally, we optimized the light management of the complete tandem device, in other words, we maximized light absorption in the tandem solar cell.”