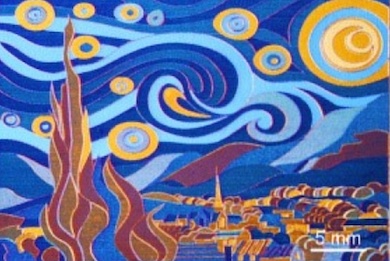 Modifications to the surfaces of metal films are a key aspect of their stability, durability and environmental impact, but they also directly affect their appearance and color.

The colors of treated metal films are themselves also a factor in the uses to which they can then be applied, so control of those hues has been the subject of considerable research.

A group at Saint Petersburg's ITMO University has now demonstrated a new way to exercise fine control over the surface colors and colored patterns made on titanium, by using a laser to create specific surface structures designed to interact with incident light in a particular manner. The work was published in Optica.

The new approach could lead to new laser-based approaches to surface marking of metals, as well as opportunities for designers and visual artists to use the technique to effectively paint colors onto the materials for either industrial or aesthetic purposes.

"We developed a way to use a laser to create localized color on a metallic canvas using a technique that heats the metal to the point where it evaporates," said research team leader Vadim Veiko from ITMO University.

"With this approach, an artist can create miniature art that conveys complex meaning not only through shape and color but also through various laser-induced microstructures on the surface."

The influence of laser irradiation on the color of a metal has been known for some time, with researchers at the University of Rochester discovering back in 2008 that femtosecond pulses produced a range of nano- and mico-scale surface modifications in aluminium though permanent changes to the absorption behavior. The same project also successfully changed the color of other metals, including gold and platinum.

ITMO University, exploiting the advances in lasers and numerical modeling since then, tackled the problem by considering precisely what occurs when a laser heats a localized area of titanium above the metal's evaporation temperature, which will be followed by metal oxidation during a cooling stage and formation of a color as the temperature drops.

Light reflected from the metallic surface and the top of the oxide film can interfere in a way that produces different colors depending on the thickness of the film, according to the project team. This oxidation regime makes it possible to either rewrite or erase colors, by varying the cooling rate.

"The possibility of rewriting or erasing colors in an airy atmosphere would take laser coloring to a new level," commented the project in its published paper, "allowing not only reproduction of already known images from a template but also modification of an image during the drawing process."

In trials, the project found that initial color formation, color erasing, and color mixing or the changing of one color to another could each be achieved by single-step laser scanning using a nanosecond ytterbium fiber-laser system, following numerical simulations based on the known optical properties of different titanium oxides.

At scanning rates of between 100 and 500 millimeters per second, nine basic colors could be created on the titanium surface, caused by different reflectance spectra of the complex multilayer areas of oxide on the treated areas.

As proof-of-concept, the project recreated Van Gogh's painting The Starry Night on a 3 x 2 centimeter substrate in four minutes. It also created a portrait of the artist, with average laser painting speeds reaching seven centimeters per minute.

Future work will involve changes to the laser pulse duration and repetition rates, which should produce different colors, and investigation of whether periodic surface gratings could create holographic effects.

Industrial applications for colored or marked titanium could benefit from the durability of the designs created in this way, and their resistance to environmental and chemical impacts. The new system is also likely to allow faster marking of the metal than existing approaches.