CIGS or silicon solar cells are integrated with perovskite to use different parts of spectrum boosting overall output. 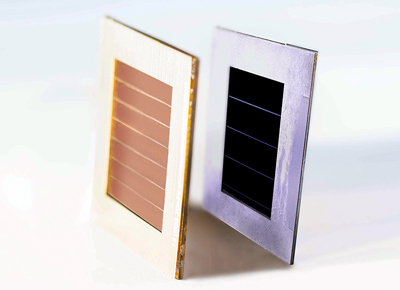 Research center imec, based in Leuven, Belgium, has presented its newly-developed tandem solar cell technologies, which it says “pave the way to higher cell efficiencies of PV panels on roofs, vehicles in solar cells in windows or building façades.

Tandem cells combine two types of solar cells applied on top of each other. Because each cell uses a different part of the sunlight spectrum, very high optical-elctrical efficiencies above 30% can be achieved.

In its tandem cells, imec combines copper indium gallium selenide (“CIGS”) or silicon solar cells with perovskite. As perovskite solar cells utilize the visible part of the light spectrum, they are ideally suited to combine with CIGS or Si solar cells, which utilize more the near-IR light portion of the spectrum.

“According to the International Technology Roadmap for PV (ITRPV), tandem solar cells are expected to appear in the market in 2021,” commented Tom Aernouts, group leader thin-film PV at imec/Energyville.

“At imec, we work on perovskite/silicon as well as on perovskite/CIGS tandems because each technology is directed towards different applications. For instance, silicon solar cells are especially suited for roofs and in solar cell parks, while CIGS thin-film solar cells can be produced on foils that could, in the future, be applied for building-integrated PV, turning facades and windows into electricity producers.”

"We are pleased that our new perovskite-based tandem cell technologies will further enhance the capabilities of these solar cells towards 30 percent.”