The MAFIn project will develop a module suitable for attachment to existing LSM platforms. 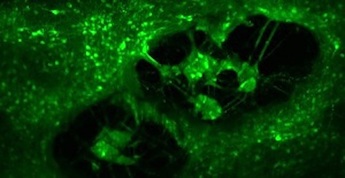 A one-year EU-supported project at ICFO, a photonics research institute based in Barcelona, aims to develop a modular light-sheet microscopy prototype able to observe fast cellular dynamics at high resolution and high speed.

Light-sheet fluorescence microscopy (LSFM) is a technique in which a thin slice of a sample, usually hundreds of nanometers or a few microns in thickness, is illuminated by a laser source perpendicularly to the direction of observation. This reduces the potential for phototoxic damage to the sample, and eliminates out-of-focus excitation.

The MAFIn project, from Module for Aberration Correction and Fast Volumetric Imaging in a Light Sheet Fluorescence Microscope, commenced in September 2019 with a total budget of €100,000. It is supported by the EU's FET Innovation Launchpad scheme, a program intended to further develop research arising from existing or recently concluded EU FET projects.

In this case the new work arises from MESO-BRAIN, another EU-supported program in which ICFO is participating. MESO-BRAIN, coordinated by Edik Rafailov at the UK's Aston Institute of Photonic Technologies, aims to develop nanoscale 3D polymer scaffolds suitable for supporting networks of stem-cell-derived neurons, as a step towards customizable 3D networks of neurons for medical research.

ICFO has worked on a light-sheet microscopy technique suitable for observing and recording these neuron cultures in three dimensions using genetically-encoded calcium indicators, and it is this work that will now be continued in MAFIn.

"LSFM eliminates any out of focus contribution to the measured signal and minimizes light dose," commented Pablo Loza from the ICFO Super-resolution Light Microscopy & Nanoscopy (SLN) lab. "Using conventional imaging techniques to make fast recordings of neuron activity in 3D can result in a low signal to noise ratio, since at fast speeds the fluorescent photon budget is low."

Applying LSFM to the novel 3D scaffolds developed by MESO-BRAIN imposed some specific challenges, including the need to maintain an acceptable signal to noise ratio at the fast recording speeds required when imaging a plane of neuron activity within a gel environment.

A further issue is the need for volumetric imaging, normally achieved by either moving the sample across the light sheet, or by moving both the excitation and collection arms of the microscope while the sample remains static. This approach can limit imaging speed to a few volumes per second, but the target in MESO-BRAIN is to achieve tens of volumes per second.

"Our solution to this is based on the use of an electrically tunable lens, a static element that can be driven very rapidly," commented Loza. "By synchronizing the driving voltage with the movement of the light sheet, fast volumetric imaging speeds can be reached. In our case, we have demonstrated volumetric imaging faster than 20 volumes per second."

Under those conditions the LSFM system proved able to record the calcium dynamics of the neurons on MESO-BRAIN scaffolds for the 10 to 20 minutes of recording time needed to calculate connectivity maps from the neurons.

The MAFIn research effort now aims to develop these advances further, and move towards a commercial module capable of being attached to existing LSFM platforms.

"MAFIn deals with a technique termed waveform coding (WFC), in which we introduce a phase mask in the detection arm of the LSFM platform to extend the depth of field," said Loza. "The phase mask inevitably distorts the images obtained, so a deconvolution operation then needs to be applied after the images are acquired. Although this does not compromise imaging speed, a careful calibration needs to be performed before starting the experiment."

One goal for MAFIn is to provide an easy calibration procedure with optimized deconvolution strategies, so that LSFM with WFC can be performed in a simple and straightforward manner. For that, ICFO will be partnering with a UK LSFM vendor to test MAFIn modules with its systems, with the ultimate goal being a prototype plug and play module suitable for use with existing LSM platforms.

"Our target application is neuron activity and calcium dynamics, but LSFM with WFC would be a general technique that could be applied for studying and monitoring any 3D dynamics in biological samples with high image resolutions," commented Loza.

"We strongly believe that this is important, as the study of any fast biological dynamic is currently performed in a plane, while biological structures are intrinsically 3D objects. Some target applications that could make use of this advance are calcium dynamics in the brains of small animals such as zebrafish, or for analysis of C. elegans; in optogenetics; for tracking of cells during embryo development; and also for single particle tracking in 3D."