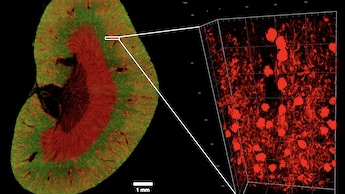 A light sheet fluorescence microscopy (LSFM) platform launched by Zeiss should assist in the observation of living samples over extended periods of time, without phototoxicity problems interfering with the outcome.

The Lightsheet 7 system has also been designed to image large optically cleared specimens in toto with subcellular resolution. Optical clearing, in which the inhomogeneity and overall light scattering of a whole sample is reduced by replacing extracellular material with a substance of higher refractive index, can in its most eye catching implementations make organic material transparent.

In Lightsheet 7, the optics, sample chambers, and sample holders can be adjusted according to the refractive index of the chosen clearing method, to observe large samples and even whole mouse brains, according to Zeiss.

"Choosing an optical clearing method depends on the type of tissue, fluorescent labels, and the size of the sample itself, and Lightsheet 7 is designed to match a multitude of conditions," commented the company.

"Specimens with a size up to 2 centimeters, with a refractive index between 1.33 and 1.58, and in almost any clearing solution can be accommodated. The system allows acquisition of overview images as well as of data with subcellular resolution. Researchers can now perform fast and gentle LSFM imaging of optically cleared organoids, spheroids, organs, brains, or other specimens."

LSFM is the technique in which thin slices of a larger sample, slices usually hundreds of nanometers or a few microns in thickness, are illuminated by a laser source perpendicularly to the direction of observation. This offers a route to improved signal to noise performance and lower phototoxicity than some other fluorescence-based microscopy techniques, through the relatively limited and controllable interaction between illumination and organic target.

The Zeiss platform incorporates a proprietary technology designed to alter the exact angle of the light sheet upwards and downwards during image acquisition, as a way to tackle the problem of shadows cast along the illumination axis when certain parts of the target, such as cell nucleii, absorb or scatter the light.

This effect, potentially inherent in all fluorescence microscopes, can be a particular hurdle in LSFM since the illumination axis is perpendicular to the observation axis, making the shadows more obvious.

Altering the illumination angle means the shadows will be cast in different directions, and excitation light will also reach regions behind opaque structures. This "pivot scanner" approach allows the acquisition of artifact-free images and improves downstream processing and analysis steps, according to Zeiss.

Potential applications for the Lightsheet 7 platform demonstrated by Zeiss include nephrology, such as the analysis of mouse kidneys in a whole-organ 3D-approach which will be valuable in the understanding of the mechanisms of diverse kidney diseases such as diabetic nephropathy; and the creation of a 3D dataset of a mouse trachea, displaying the anatomical organization of mechanosensory nerve fibers.

Zeiss has also shown that the Lightsheet 7 can image entire mouse brains, a potentially valuable tool in the understanding of brain development and function. In an application example quoted by the company, its platform acquired an image of a mouse brain, an imaging volume of 13 x 13 x 6 millimeters, in around 40 minutes.