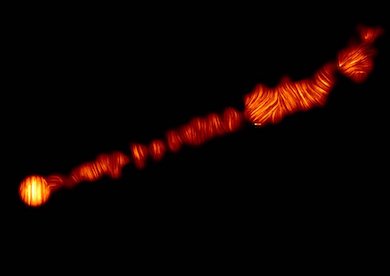 Towards the event horizon: M87

The Event Horizon Telescope (EHT) collaboration, which published the first image of a black hole in April 2019 based on observations collected in 2017, has now studied the polarization data from the same object.

EHT links eight radio telescopes around the world, including the ALMA installation in Chile. Advances in polarimetry techniques can allow images representing the polarization of light to be created from the incoming polarized radio signals.

"Astronomers have obtained a new tool to study the magnetism of a black hole with the direct imaging of the polarization of light," said Kazunori Akiyama from the EHT Imaging Working Group.

"This remarkable feat by the Event Horizon Telescope was truly achieved by years of international efforts to develop the state-of-the-art techniques in every single stage of the complex signal processing, from the telescopes to the images."

The object being studied is the black hole at the center of the M87 galaxy in Virgo, from which an extra-galactic jet has been observed extending from the nucleus and emitting polarized radiation.

As published in two papers from Astrophysical Journal Letters, the new analysis created images from closer to the event horizon of M87 through a combination of EHT data and observations with ALMA. Separate analysis of EHT signals also produced polarimetric images of the emission ring structure further out around M87.

In both cases the polarimetric images help reveal the structure of the magnetic fields around the black hole, since light becomes polarized when emitted in hot regions of space when such fields are present.

"This work is a major milestone," said Iván Martí-Vidal from EHT. "The polarization of light carries information that allows us to better understand the physics behind the image we saw in April 2019, which was not possible before."

The polarized light data suggests that the fields at the black hole's edge are strong enough to push back on the hot gas and help it resist gravity's pull, with only the gas that slips through the field spiraling inwards to the event horizon.

"EHT is making rapid advancements, with technological upgrades being done to the network and new observatories being added," said team member Jongho Park. "We expect future EHT observations to reveal more accurately the magnetic field structure around the black hole and to tell us more about the physics of the hot gas in this region."

In another collaboration between optical and radio astronomy, two groups backed by the European Commission have joined forces and merged to form the Continent's largest collaborative network for ground-based observations.

The existing Opticon group, or the Optical Infrared Coordination Network for Astronomy, was created to foster the academic backbone of Europe's optical near-IR astronomy efforts, in recognition of the fact that national and multi-national agencies such as ESO build upon such research and expertise.

Coordinated by the University of Cambridge, Opticon consists of more than thirty institutions, and its most recent funding was a commitment of €10 million under the EU Horizon2020 research program.

RadioNet, of similar size and financial backing, aims to represent the interests of European radio astronomy and integrate research infrastructure in the sector.

The two groups have been considering a possible merger since November 2020, and the full-scale merging of the networks and their combined 36 partners has now been agreed, with the aim of harmonizing observational methods and tools, and providing access to a wider range of astronomy facilities.