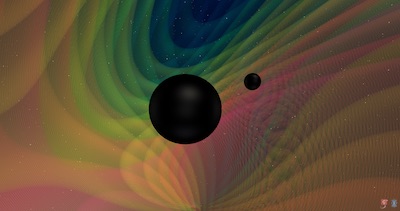 The third observing run, or O3, of the combined US Laser Interferometer Gravitational-wave Observatory (LIGO) and European Virgo interferometer has revealed a signal thought to originate from the merger between two black holes of distinctly different masses.

The first gravitational wave event detected back in 2015 also originated from a binary black hole merger, and these have become the most prominent events recorded by LIGO. But nearly all such mergers detected so far have involved black holes of nearly equal masses.

"Every observing run of Advanced LIGO and Virgo has so far given us new insights into our universe, and the third observing run is no exception," said Frank Ohme, LIGO scientist and Research Group Leader at the Max Planck Institute for Gravitational Physics (Albert Einstein Institute, AEI).

Unequal masses imprint themselves on the observed gravitational-wave signal, which in turn allows scientists to more precisely measure certain astrophysical properties of the system.

According to project team, the presence of higher harmonics in such a signal makes it possible to reconcile an ambiguity between the distance to the system and the angle at which its orbital plane is observed. These properties can then be measured with higher precision than in equal-mass systems, where the higher harmonics are lacking.

The O3 run commenced a year ago in April 2019, after the observatory had undergone a number of upgrades to its optical and detector systems. The latest finding is said to be the second discovery reported since the current run began.

However, LIGO and Virgo reported at the end of March 2020 that the O3 run had been suspended in response to the Covid-19 pandemic, and a date for recommencement has not yet been decided. The next phase of LIGO upgrades, termed LIGO A+, is still due to be completed by 2023, although it too may now be influenced by events.

Benefits for all future observations

The upgrades for O3 included the application of "squeezed light" sources, which generate custom-tailored quantum states, according to developers at AEI. This modifies the system's background noise in such a way that it interferes less with the measurements, and enhances the observatory's sensitivity.

“The AEI is leading the world-wide efforts to maximize the degree of squeezing, which has already improved the sensitivity of the Institute's own GEO600 gravitational wave detector by a factor of two," said AEI's Karsten Danzmann. "Our advances in this technology will benefit all future gravitational-wave detectors."

Other improvements have involved changes to the laser power employed, intended to allow powers to be raised from the relatively low levels employed in LIGO's initial discoveries. Speaking to Optics.org in 2018, LIGO senior engineer GariLynn Billingsley of Caltech said that O3 would see a change to the laser's second amplification stage, a research effort building on technology developed at LZH in Hanover and which is being commercialized through spin-out neoLASE.

The O3 run also saw developments in the cooperation between LIGO and Virgo, located in Tuscany, which was originally constructed to use a shorter interferometer arm and hence somewhat different core optics sub-systems, compared to the US facilities.

LIGO and Virgo's latest signal detection, identified as GW190412, is thought to mean that similar black hole mergers are not as rare as had been predicted by some models. The detector network had issued alerts for 56 possible gravitational-wave events between April 2019 and March 2020, and scientists are now examining the data for all the remaining candidates to confirm their astrophysical origin.