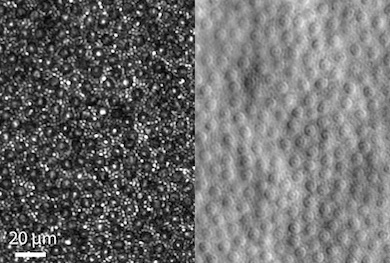 Imaging of the human retina offers an opportunity to visualize an integral part of the central nervous system in a non-invasive manner, and functional imaging techniques for doing so are becoming increasingly sophisticated.

One particular goal is to image the rod and cone photoreceptors in the part of the retina where they have the smallest diameters, typically 1 to 3 microns, close to the resolution limit of current techniques when near-infrared light is employed.

A project at the US National Eye Institute (NEI) has now developed a new imaging platform intended to synergistically combine a set of individual optical enhancements so as to achieve new improvements in overall resolution.

As reported in Optica, the platform ultimately improved imaging resolution by a third, partly by selectively blocking the light used to image the eye.

"Better imaging resolution will enable better tracking of degenerative changes that occur in retinal tissue," commented the NEI's Johnny Tam. "The goal of our research is to discern disease-related changes at the cellular level over time, possibly enabling much earlier detection of disease."

The first of the project's enhancements to established adaptive optics scanning light ophthalmology (AOSLO) involved the use of smaller pinholes in its confocal architecture, specifically pinholes of the size termed sub-Airy disk diameter (ADD). Airy disk diameter refers to the size of the best-focused spot of light theoretically achievable from a given lens if its optics performed perfectly, with sub-ADD pinholes designed to be smaller in aperture than that.

In addition the platform employs annular pupil illumination, which masks the central part of the illumination beam to control the amount of light involved while also tending to creating a narrow or elongated focus.

These two design changes work synergistically together, according to the NEI team, with sub-ADD confocal detection cancelling out the axial elongation to the point spread function of the light caused by annular illumination.

Determine if new therapy is working

"Blocking the light that illuminates the eye in the middle of the beam, to create a ring of light rather than a disk, improves the transverse resolution across the photoreceptor mosaic," said the project. "But that comes at the expense of axial resolution, the depth of the mosaic. To compensate, blocking the light coming back from the eye using the super small pinhole, a sub-Airy disk, recovers the axial resolution that would have been lost using the ring of light alone."

In trials on human patients, the combined modifications to an AOSLO platform demonstrated a 33-percent improvement in transverse resolution compared to established methods, from 2.36 to 1.58 microns; and a 13-percent axial resolution enhancement from 37 to 32 microns.

Use of annular pupil illumination also turned out to improve non-confocal imaging by boosting the contrast of photoreceptors in the non-confocal split detection channel, a phenomenon that the team plans to investigate further.

The new results suggest a potential improvement in the ability to obtain in vivo higher resolution multimodal images of the smallest neurons in the retina, an important step towards observing how the central nervous system works in the living human body.

This could allow the early detection of retinitis pigmentosa, which firstly attacks rod cells and can be hard to spot even with adaptive optics in clinical settings. Improved imaging of cone cells should likewise assist the diagnosis of age-related macular degeneration.