University of Rochester tracks cell interactions in a living eye without dyes or damage. 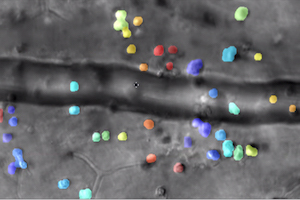 On the move: immune cells in the retina

A project at the University of Rochester Center for Visual Science and the Flaum Eye Institute has successfully imaged immune cell motility and vascular response in the retina using a novel platform.

Described as potentially "a game-changer" for clinical diagnoses and pharmaceuticals, the technique employs high-resolution phase-contrast adaptive optics for its retinal imaging, combining infrared videography and artificial intelligence for data analysis.

Imaging of the immune cells has traditionally required the use of labelling dyes or surgical manipulation, but the new method avoids those hurdles, being the first study of its kind not to require dyes at all. It allows cellular motility and differential vascular responses to be measured noninvasively and in vivo across hours to months, according to the project.

"The eye is an extension of our brain, and therefore with this technology we have some of our first glimpses into immune cell function deep in the central nervous system," commented Rochester's Jesse Schallek. "This is a critical step forward for basic science and clinical study alike."

Immune cells are closely involved in the inflammation that is characteristic of most retinal eye diseases. The arrival of immune cells and changes in blood flow are both factors in the progression of a disease, according to the Rochester team.

Optical coherence tomography has previously been used to measure the thickness of retinal tissue at the back of the eye, and provide a marker for how inflamed the tissue is. But OCT cannot really describe what the immune cells in the tissue are actually doing.

The Rochester project built on its previous research into phase contrast approaches to the imaging of translucent cells within tissues, and developed a custom adaptive-optics-scanning-light-ophthalmoscope (AOSLO) to image a mouse eye.

"We combined and applied these strategies and serendipitously discovered that immune cells could be imaged without labeling using 796 nanometer near-infrared light, to which the eye is insensitive, and at far lower levels (below 500 microWatts) than multiphoton systems that can be phototoxic," commented the project in its paper.

Time lapse videography was then used to capture images of immune cell activity in the retina over periods ranging from milliseconds to two months. Adjusting the playback speed allows the slow movements of those cells can be more easily tracked, according to the project.

Algorithms designed by the lab can identify the different kinds of immune cells captured in the images, while ultra-high-speed imaging of individual red blood cells can simultaneously track blood flow and observe how it changes in response to inflammation.

"A defining characteristic of immune cells is that they are truly mobile and incredibly dynamic, rushing to wherever inflammation occurs," commented Colin Chu, an ophthalmologist and visiting senior research fellow from University of Bristol who spent three months in Schallek's lab.

"The first time we successfully imaged them was astounding, as we were essentially spying on them as they worked within their actual native setting."

"They will be able to see if they can improve the efficacy of drugs that are already approved, and others that are still in development," noted Schallek.