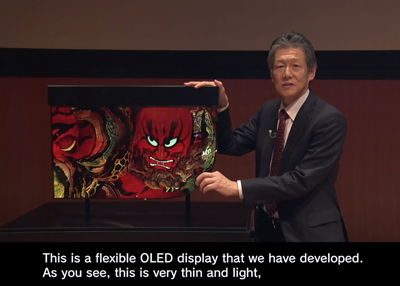 Kohji Mitani presents a tour of the fast-emerging world of 8K-era innovations.

A senior NHK executive dazzled the Photonics West Digital Forum on Tuesday, presenting a tour of the fast-emerging world of 8K-era innovations that are altering how remote viewers can be brought together by the TV of the future.

Kohji Mitani, a leader in the development of 8K technology at Japan’s Science & Technology Research Laboratories (STRL), spoke from his office at Tuesday’s OPTO plenary session.

NHK (the Japan Broadcasting Corporation) is leading the world by broadcasting in the 8K format, Mitani said, with AR and VR offering “greater presence and realism” and “more realistic, immersive and reliable experiences than ever before” .

A video of separated viewers showed them seeing their hands meeting, letting them “enjoy each other and see each other’s hand gestures, in a natural manner,” as Mitani described it. At one point, a TV performer appeared with them the living room.

Another video showed a TV screen that continued to show its program while he bent the soft material up from the corner. “It can open new content presentation possibilities,” Mitani said, intriguingly.

Mitani’s lofty remarks, titled “Ultimate Two Dimensional Media and Evolution of Advanced Immersive Sensory Media,” were not just about devices like TV sets and Smartphones but focused on “the people who ultimately receive the content” which he said creates “excitement and dreams in a virtual space.”

The devices, Mitani said, “will create a space that evokes a feeling.”

Mitani apologized for being unable to speak in-person at Photonics West, but quickly added that in the global pandemic “the demand for realism in the virtual space is growing.” Along the way, he said, “the rapidly evolving 8K product is changing how people interact.” 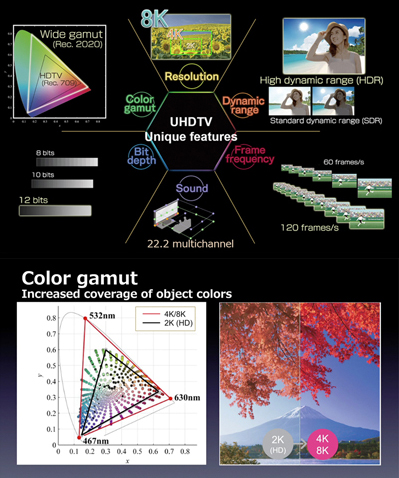 Starting in 1964, just after the Olympic Games in Tokyo, NHK began research on requirements for HDTV. Over the years, its researchers have helped standardize 4K and 8K, the highest resolution in the ultra-high definition TV standard, a format Mitani said could “match seeing reality itself”.

Those “highly immersive experiences” from 8K provide a field of view, or FOV, of 100 degrees. FOV, Mitani said, and its “color gamut” shows almost all object colors, “faithfully”.

The 8K sound, he said, supplies “the ultimate in immersive experience. It can localize sound in any direction.”

And now, Mitani said, NHK is, “with 8K as the basis, taking on the challenge of creating a new content experience” worthy of the advanced sensory media potential.

“Content consumption styles will be very flexible,” Mitani said and explained: “You could enjoy 8k on a big display, and then watch some scene on a portable 3D TV to see it all from various angles.”

Use of the AR and VR technologies will unite viewers in “brand new viewing experiences. It will enable people to watch while feeling like they are together in the same space.”

Taken together, the AR, VR and 3D technologies “will provide an experience of being in a new place. It will make deeper connections, as friends or family in remote locations enjoy the same content. Performers will appear in your living room.”

That R & D on “the sharing of experiences” through immersive media is continuing at NHK, Mitani said, exploring how viewers in distant locations can adopt “viewing styles for the future.”

“We are still investigating how to provide the feeling of immersion,” he said.

Sound, Mitani said, is undergoing major research. The goal is for sound to be sent, before mixing, to the viewers’ home, along with metadata, to be “expressed with the correct impression as if the listener is right at the scene.”

It is all being designed, Mitani said, “to make media experiences fun, impressive and inspiring. The emphasis is on human interactions. Not on TVs or smart phones but on the people who ultimately receive the content.”