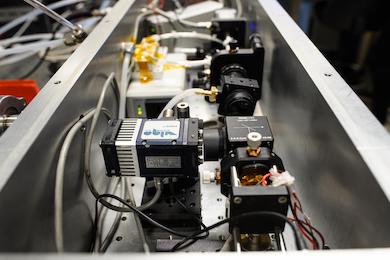 Methane from agricultural and industrial sources represents a significant issue in climate change, since although not as abundant as carbon dioxide the hydrocarbon is known to be a more potent greenhouse gas.

Detection of methane has therefore been a focus of research for some time, with laser-based sensors potentially making it easier to identify leaks of the gas from industrial facilities or biogas plants, among other locations.

Using an appropriate IR emitter has been the key to effective methane detection, but the need for the final device to be affordable and cost-effective has hindered the adoption of the expensive mid-IR LEDs thought to be the best emitters for the purpose.

A project at Princeton University has now developed a possible solution, by using interband-cascade light-emitting devices (ICLEDs) as the light source. The work was published in Optics Express.

"The ICLEDs we developed emit roughly ten times more power than commercially available mid-IR LEDs have generated, and could potentially be mass-produced," said Jerry Meyer of project partners the Naval Research Laboratory. "This could enable ICLED-based sensors that cost less than $100 per sensor."

ICLEDs are a development of interband cascade lasers, in which materials selection and novel design creates a cascading architecture to enhance light generation from IR lasers. Adapting these principles for IR LEDs can allow efficient spontaneous continuous wave emission at powers better than those available from conventional diodes, or mean that different wavelengths can be combined for multi-band or broadband output.

"Because of these advantages, we expect ICLEDs to provide optimal mid-IR and long-wavelength-IR light sources for low-cost gas sensing," commented the Princeton project in its published paper.

The project used a new ICLED developed at the Naval Research Laboratory designed with an an 18-stage interband cascade active core, an architecture intended to substantially improve the sensitivity of the overall sensor platform.

The finished sensor platform also employed a 1-meter plastic hollow-core optical fiber as the gas cell. Although such fibers have been widely used in gas sensing thanks to the long path length they can provide, this project is the first implementation of a hollow-core fiber-coupled ICLED, according to the Princeton team.

In trials, the ICLED sensor was able to detect methane concentrations as low as 0.1 parts per million while also showing agreement with calibrated standards. A low-cost sensor capable of sub-ppm detection represents a potentially significant benchmark for petroleum, agriculture and waste industries, according to the project.

"This level of precision is sufficient to monitor emissions near sources of methane pollution," said Nathan Li of Princeton's Atmospheric Chemistry and Composition Group. "An array of these sensors could be installed to measure methane emissions at large facilities, allowing operators to affordably and quickly detect leaks and mitigate them."

Future work will involve improving the mechanical stability of the hollow-core fiber to make it practical for long-term field measurements, along with studying the impact of harsh weather conditions on the performance of the platform. The methane sensor could also be adapted to detect other important greenhouse gases, as part of efforts to monitor climate change.

"We hope that this research will eventually open the door to low-cost, accurate and sensitive methane measurements," commented Li. "These sensors could be used to better understand methane emissions from livestock and dairy farms and to enable more accurate and pervasive monitoring of the climate crisis."