Spectrometer on board Curiosity rover detects 'belches' of gas that may indicate presence of microbes. 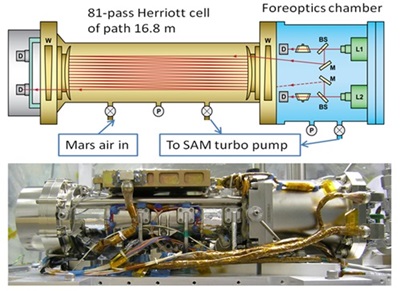 A tunable laser spectrometer on board NASA’s Mars Curiosity rover has picked up one of the strongest signs of extra-terrestrial life ever seen.

The equipment, developed and built by the agency’s Jet Propulsion Laboratory, picked up an order-of-magnitude spike in the concentration of methane gas. Described as “belches”, the fluctuations in methane concentration indicate some kind of localized release of the gas – possibly but not necessarily a result of microbial action on the red planet.

Sushil Atreya from the University of Michigan in Ann Arbor, part of the Curiosity rover science team, said in a NASA release: “This temporary increase in methane -- sharply up and then back down -- tells us there must be some relatively localized source.

“There are many possible sources, biological or non-biological, such as interaction of water and rock.”

Though NASA stressed that the latest findings do not reveal whether Mars has ever harbored living microbes, they do suggest that modern Mars is a chemically active rather than “dead” planet, and that the ancient planet would have hosted conditions favorable to life.

NASA says its researchers have been working for many months to determine whether any of the organic material could in fact have been transported from Earth inside the rover during its journey. “However, extensive testing and analysis yielded confidence in the detection of Martian organics,” it said.

Methane concentration ‘spikes’
Reported in the journal Science, the methane fluctuations were recorded in Mars’ Gale crater. The tunable laser spectrometer, part of Curiosity’s sample analysis at Mars (SAM) instrument suite, recorded four sequential “spikes” of methane gas, during which its concentration rose from a background level of less than one part per billion to around seven parts per billion.

The sequential bursts of the gas imply that Mars is “episodically producing methane from an unknown source” wrote JPL’s Chris Webster and colleagues.

They cannot be certain that the spikes in methane concentration are caused by extra-terrestrial microbes, because there are other ways to produce the gas – for example through ultraviolet irradiation of other organic molecules, either directly or through a secondary photochemical reaction.

However, the team believes that this route to methane production is consistent with the background levels of around 0.7 parts per billion. An alternative explanation for the elevated concentrations could be a recent meteor strike – but Webster and co-workers reckon that to generate the measured increase in methane would have required a meteor several meters in diameter, and there is no evidence for such a strike in the vicinity of the rover since its arrival.

Tunable laser technology
The tunable laser spectrometer features a two-channel “Herriot” cell, which enables detection of low gas concentrations by bouncing the laser light repeatedly through the sample between two mirrors set around 20 cm apart. Methane is detected from its absorption line at 3.27 µm in the “molecular fingerprint” mid-infrared region.

The laser passes through the sample 81 times - a total path length of 16.8 meters - making the gas much easier to measure than would otherwise be possible with such a compact instrument.

The laser kit actually features two different semiconductor continuous-wave laser sources, which are used to scan over three wavelength regions. An interband-cascade laser built by JPL is used to measure the methane gas concentration, while a near-infrared (NIR) tunable diode laser from Nanoplus and operating at 2.78 µm detects carbon dioxide and water.

NASA points out that the same tunable laser technology is now being tested for use on Earth, as part of safety equipment needed by utility companies to check for leaks in pipelines carrying natural gas.