Pacific Gas and Electric says it is the first energy firm in the US to pilot the hand-held laser technology for continuous monitoring. 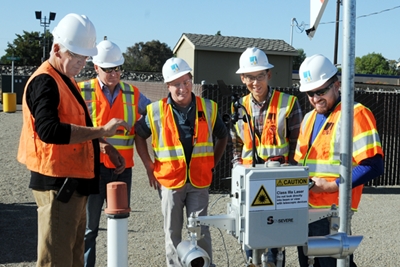 Major US energy provider Pacific Gas and Electric (PG&E) is trialling a new laser-based sensor for continuous detection of methane gas, at one of its natural gas storage facilities in northern California.

PG&E, which is testing out a sensor provided by Acutect as part of the Methane Detectors Challenge, claims to be the first energy company in the US to pilot the photonics technology, which is based on tunable diode laser absorption spectroscopy (TDLAS).

Backed by the US-headquartered Environmental Defense Fund (EDF), a non-profit organization in New York, the Methane Detector Challenge is a partnership between oil and gas companies and US technology firms aiming to detect methane leaks in real time and then fix them rapidly.

Methane concentration up sharply
Although not nearly as abundant in the Earth’s atmosphere as carbon dioxide, methane is known to be a far more potent greenhouse gas – and is estimated to have contributed about a quarter of the total anthropogenic global warming effect measured thus far.

And in a study published this week in the Institute of Physics journal Environmental Research Letters, a multi-national team of scientists wrote that methane concentrations were rising at a far faster rate than those of carbon dioxide, but that a lack of monitoring meant it was unclear exactly what is responsible for the surge.

PG&E says that more than 9.8 million metric tons of methane are emitted across the US oil and gas supply chain every year. “Technologies that continuously detect methane emissions offer opportunities to not only improve air quality and operational efficiency, but also recapture resources that would otherwise be wasted - all while limiting contributions to climate change,” added the energy firm.

“Continuous 24-hour monitoring offered by this technology could cut the time it takes to detect leaks from months to hours. This would lead to improved environmental performance and operational efficiency of gas infrastructure.”

“After our technology successfully made it through third-party testing during the Methane Detectors Challenge, Acutect is now in licensing negotiations with a well-established supplier of industrial sensing solutions,” Foller said. “We feel we will be able to, together with this licensee, go to market on a national scale.”

The pilot conducted by PG&E will study the reliability, accuracy and durability of the technology over the course of three months in a real-world setting.

$2BN problem
Aside from the environmental costs of methane leaks, it is believed that the US gas industry alone loses around $2 billion every year as most of the leaks go undiscovered because of the lack of sufficiently cheap continuous-monitoring technologies. Studies suggest that at least 2 per cent of the methane resource is wasted through leaks at production sites.

While infrared cameras from the likes of FLIR Systems are able to image such leaks because of their infrared spectral signatures, this approach is seen as prohibitively expensive for widespread deployment across giant facilities.

Nor is Acutect the only company working on a laser-based solution to the issue of methane leaks. Under a $4.5 million, three-year project funded by the US Department of Energy’s “ARPA-E” research program, a team at IBM is working on a multi-modal TDLAS sensor expected to cost only $300 per unit – said by IBM to be 10-100 times cheaper than current TDLAS sensors.

And next year will see the Norwegian energy giant Statoil pilot-test another laser-based sensor as part of the Methane Detector Challenge. Colorado-based Quanta3, started up specifically to participate in the challenge, is developing the technology.