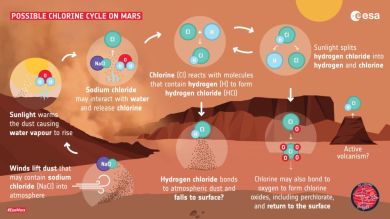 The Trace Gas Orbiter instrument orbiting Mars as part of the ExoMars program has discovered the presence of hydrogen chloride in the planet's surface.

Other new findings from the instrument have refined the understanding of how Mars lost its surface water, a process which is also linked to seasonal changes. The findings were revealed via two papers in AAAS Science Advances.

Launched in 2016 and reaching Mars in October of that year, the Trace Gas Orbiter represents the first of two scheduled ExoMars missions (named for their Exobiology on Mars agenda), operated by the European Space Agency (ESA) and the Russian space agency Roscosmos. The second is due to be launched in 2023 and carry a rover vehicle to the surface via a Roscosmos lander.

"It is incredibly rewarding to see our sensitive instruments detecting a never-before-seen gas in the atmosphere of Mars," said Oleg Korablev, principal investigator of the Atmospheric Chemistry Suite (ACS) instrument that made the discovery. "Our analysis links the generation and decline of the hydrogen chloride gas to the surface of Mars."

The Trace Gas Orbiter is designed to hunt for trace gases in the Martian atmosphere, especially hydrocarbons or sulfur species which may be signatures of active biological or geological processes. Methane was a particular objective when the spectroscopy platform was designed and commissioned.

The platform's experimental payload includes four instruments, according to the ESA. These include Nomad (Nadir and Occultation for MArs Discovery), combining one ultraviolet and two infrared spectrometers for analysis of the Martian atmosphere via both solar occultation and direct reflected-light observations. The ACS instrument complements Nomad with three infrared instruments, to extend the coverage at IR wavelengths.

Identification of HCl had always been on ExoMars's agenda as being a likely product of volcanic activity. But the new findings detected the molecule in isolation, away from any such activity, and suggest a different origin.

ESA believes that salts such as sodium chloride can be lifted into the atmosphere by Martian winds and dust storms, where they then react with atmospheric water to release chlorine. This then reacts with hydrogen-containing species to produce the hydrogen chloride detected by the Trace Gas Orbiter. The chlorine or hydrochloric acid-rich dust eventually returns to the surface.

The same spectroscopic instruments have also revealed new information about how Mars lost much of its liquid water, with what remains now locked in polar ice caps or underground.

Since 2019 the Nomad and ACS spectrometers have examined the absorption of sunlight by the Martian atmosphere, and used it to determine the vertical distribution of both water and "semi-heavy" water - molecules in which one hydrogen atom is replaced by deuterium.

The ratio of deuterium to hydrogen is effectively a chronometer for the removal of natural hydrogen-containing water from Mars, according to the project team, and data from the Trace Gas Orbiter has now enabled this chronometer to be calibrated and used to hunt for potential new reservoirs of water on Mars.

"With the Trace Gas Orbiter we can watch the path of the water isotopologues as they rise up into the atmosphere with a level of detail not possible before," said Nomad principal investigator Ann Carine Vandaele. "Previous measurements only provided the average over the depth of the whole atmosphere, and give us a 2D view. Now we can explore the atmosphere in 3D."

The data revealed significant variability in the ration of deuterium to hydrogen with altitude and season, as the water rises from its original location. Once the water is fully vaporized it displays a consistent enrichment in the quantity of semi-heavy water, and a D/H ratio six times greater than that found on Earth. This confirms that large amounts of water have been lost from the Martian surface over time, according to the ExoMars team.

"The changing seasons on Mars, in particular the relatively hot summer in the southern hemisphere, seems to be the driving force behind our new observations of the enhanced atmospheric water loss and the dust activity linked to the detection of hydrogen chloride," commented Håkan Svedhem.

"Trace Gas Orbiter observations are enabling us to explore the Martian atmosphere like never before."