The company's infrared system for detecting signs of medical conditions in exhaled breath will soon receive US patent approval. 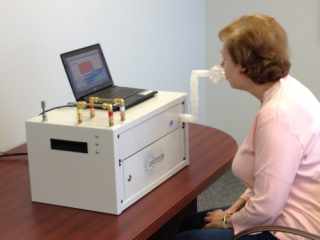 Picomole, a developer of breath analysis systems for clinical applications, has announced that it has received a US Patent Notice of Allowance, indicating that the Patent Office believes the company to be entitled to a patent under the law.

As a result, the Canadian company's laser-based breath analysis technology should begin moving closer to real-world exploitation across a range of diagnostic uses.

John Cormier, CEO of Picomole, told Optics.org that since founding the company in 2005 he has believed that breath analysis could play a useful role in clinical diagnosis, and be made simple enough for practical use at the point of care.

"The pioneers of breath analysis have long struggled with technologies that are expensive, slow, hard to use and demonstrate poor reproducibility," he said. "Over the years, we have witnessed attempts to overcome these challenges with new technologies, mostly built from the same underlying principles of mass spectrometry. Unfortunately, these technologies have important limitations that have inhibited their commercial success."

A clinical breakthrough for breath analysis has been awaited for many years, with the ability of infrared-based analyzers to detect halogenated hydrocarbons, alcohols, ketones and other trace metabolites in exhaled breath samples being first demonstrated in 1963. Modern advocates of the technique believe that it could be of value in the early diagnosis and management of conditions including breast cancer, lung cancer, liver disease and kidney disease, if the associated difficulties in implementation can be dealt with.

The Picomole solution is LISA, or the Laser Infrared Sample Analysis system, intended as a turn-key system for clinical use. Cormier believes that LISA specifically addresses the limitations suffered by previous versions of breath analysis platforms.

Clinical trials underway
"Picomole's technology is clearly differentiated because it is easy to use, fast, and fully quantitative," he commented to Optics.org. "Although these claims may be made of other infrared technologies, ours is the only one capable of simultaneously quantifying hundreds of compounds in a sample down to parts-per-billion levels and below. This makes it ideal for applications where the sample is a relatively complex mixture, for example in breath analysis."

Although the company has not disclosed the platform's technical details, recent advances in the manufacture of compact and tunable infrared sources seem likely to be key factors.

Addressing the specific claims covered by the patent, Cormier commented that it "discloses the apparatus and methodology for rapid and quantitative analysis of gas and liquid mixtures using infrared spectroscopy. It is a method of performing sample analysis and quantification in regimes where individual quantum mechanical transitions are typically not resolved, for example due to pressure broadening or intermolecular forces."

Cormier also welcomed the Notice of Allowance as strengthening the company's ability to protect its proprietary technology as it develops clinical applications.

(This article has been modified since its original publication to reflect updated information.)