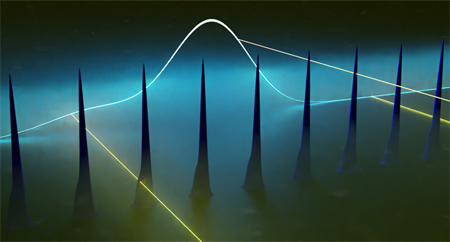 Lasers that emit light not as a continuous beam but in extremely short bursts — typically of picosecond (10-12 s) length or shorter — have transformed various fields of science and technology, from studying atomic and molecular processes at “ultrafast” timescales to the precise delivery of highly concentrated amounts of energy for material processing and eye surgery.

Versatile lasers exist nowadays for many such applications in the visible to near-infrared range of frequencies. By contrast, devices at lower frequencies are often limited by relatively long pulse durations and low peak powers, and entail complex, bulky instrumentation.

This could change now, owing to an advance in the group of Prof. Jérôme Faist at the Institute for Quantum Electronics at ETH Zurich. Reporting in Nature Photonics, they demonstrate for the first time the generation of powerful femtosecond pulses in the mid-infrared region.

In their experiments, the ETH team used quantum cascade lasers (QCLs), a type of laser that has been first realized in 1994 by a team spearheaded by Faist at the Bell Laboratories in the US. QCLs have since enabled a multitude of fundamental studies and practical applications, in particular in the mid-infrared range (25–100 THz). However, ultrashort pulses have so far not been part of the toolchest provided by QCLs.

This has been an important gap, given that QCLs generate mid-infrared radiation directly. That is, they do not rely, as other types of mid-infrared light sources do, on converting light from higher to lower frequencies, which is typically an inefficient process that limits the power levels that can be achieved.

The primary bottleneck for generating ultrafast pulses with QCLs is that the fast dynamics of the active medium inside the cavity — which is where the laser pulse is formed — prevents high-power pulses to build up. There are ways around this limitation, but pulses generated by mid-infrared QCLs were until now limited to picosecond length and sub-watt power, thus restricting their applicability.

Now PhD student Philipp Täschler and his colleagues in the Faist group have neatly combined several techniques. Moreover, they exploited recent experimental and theoretical findings regarding the phase behaviour of trains of pulses emitted from QCLs, known as frequency combs. Taking on board these new insights, they realized that well-established methods for compressing pulses outside the cavity can be employed for the problem at hand. This proved to be the key to generating powerful ultrashort pulses in the mid-infrared.

Not only did Täschler et al. tackle in their work the generation of such pulses. They developed as well a new optical-sampling technique for characterizing these flashes of light, assuring them that indeed they succeed in pushing mid-infrared pulses into a new regime.

The team produced pulses as short as 630 femtoseconds in length — by a factor of five shorter than the state of the art — and of 4.5 watt peak power, which is roughly a factor of ten higher than what has been achieved before.

These pulse lengths are close to the lower limit of what is fundamentally possible for the optical bandwidth given. But with wider-bandwidth sources, they expect that 300-femtosecond pulses are within reach. Similarly, further improvements could push the peak power to some 100W. This raises the perspective for a direct and powerful source covering the full mid-infrared spectrum.

These are bright prospects, all the more as QCLs are compact light sources that can be integrated on chips. As such, the advance of Täschler and colleagues promises to open up practical routes to accessing ultrafast dynamics across the molecular fingerprint region. On the fundamental side, the high peak powers too should enable a new class of experiments, exploiting nonlinear effects, which in turn could lead to new capabilities in precision measurements.

• Philipp Täschler will be presenting on this work at Photonics West 2022 in a paper entitled Femtosecond pulses from a mid-infrared quantum cascade laser.