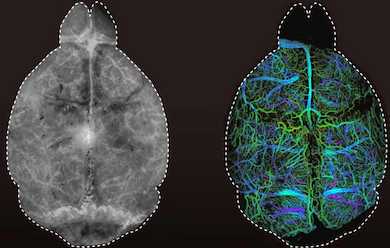 A fluorescence microscopy variant developed by ETH Zurich and the University of Zurich could help overcome issues of light scattering in deep-brain microangiography.

As published in Optica, the diffuse optical localization imaging (DOLI) method is intended to allow super-resolution deep-tissue fluorescence microscopy beyond the limits imposed by light diffusion and without invasive surgery.

The project believes that its new platform is a step towards achieving a long-standing goal in neuroscience.

"Visualising biological processes deep in the intact living brain is crucial for understanding both its cognitive functions and neurodegenerative diseases such as Alzheimer’s and Parkinson’s," commented Daniel Razansky, Professor of Biomedical Imaging at ETH Zurich.

DOLI has been designed specifically to overcome the barriers presented by photon scattering at relatively deep tissue depths. Diffuse imaging techniques, involving several approaches to dealing with inherent tissue scattering, have been a focus of bioimaging research for some time.

"The method capitalizes on localization imaging principles to accurately track flowing microdroplets encapsulating lead sulphide-based quantum dots in a sequence of epi-fluorescence images," noted the project in its published paper. "This enables high-resolution fluorescence imaging in the diffuse regime of light."

In its first proof-of-concept experiments, the Zurich project employed lead suphide microdroplets that were an average of 8.4-microns in size. Subsequent in vivo trials on mice employed quantum dots (QDs) consisting of lead sulphide cores and cadmium sulphide shells in an emulsion of dichloromethane. Such QDs are known to strongly fluoresce in a window of the near-infrared.

The DOLI principle involves using a 855-nanometer laser to illuminate the quantum dots within brain tissues, with a commercial bright-field microscope capturing a time-lapse dataset of the backscattered fluorescent light.

Image analysis is then used for localization of the point sources and computation of their depth, based on modelling of how fluorescent spot size relates to distance below the surface.

The team then injected mice with microdroplets of the encapsulated fluorescent quantum dots, and used the technique to successfully image the brain of the live animal.

Retrieving depth information from planar fluorescence image recordings by exploiting the localized spot size means that DOLI operates in a resolution-depth regime previously inaccessible with optical methods, according to the Zurich team.

"For the first time, we were able to clearly visualize the microvasculature and blood circulation deep in the mouse brain entirely noninvasively," said Razansky. "For DOLI you basically need a relatively simple and affordable camera setup without any pulsed lasers or sophisticated optics, which will facilitate the dissemination in labs."

The technique can also retrieve additional functional information on blood flow velocity and direction by tracking the microdroplet trajectories, which the team used to create color-encoded flow direction maps of the in vivo brain.

Future work will involve enhanced modelling to more accurately account for heterogenious scattering and absorption properties of complex tissues, and the use of different quantum dot particles able to fluoresce more intensely at the smaller 5-micron sizes required for travel through other microvascular networks.

The Zurich project believes that DOLI could then help to improve understanding of the biological causes of neurodegenerative and other brain diseases, and to detect them at an early stage.

"We assume that this technique will also lead to new insights into brain function," said Razansky. "In the longer term, it will facilitate development of new therapeutic options."