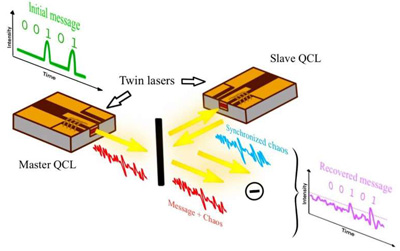 Chaos theory: experimental setup for free-space comms based on QCLs.

“The core idea behind our research is that private free-space communication with quantum key distribution is promising, but it is probably years away, or even further,” commented Olivier Spitz, one of the researchers who carried out the study. “Currently, the main limitations of this technology are its requirements for cryogenic systems, very slow data rates, and costly equipment.”

Spitz and his colleagues propose an alternative to previously proposed systems for achieving private free-space communication, which implement a cryptographic protocol based on the laws of quantum mechanics. The new system they devised is based on the use of two uni-directionally coupled quantum cascade lasers. It is described in Nature Communications. 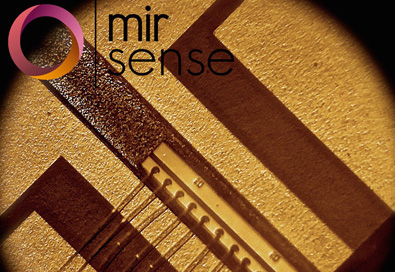 Microscope image of a QCL ridge.

“We can thus envision transmission with a very long range and with immunity to the atmospheric conditions. Moreover, the mid-infrared wavelength implies stealth, as the background radiation is in the same wavelength domain.”

The mid-infrared wavelength of the quantum cascade lasers makes it even harder for a potential eavesdropper to decipher information exchanged using the researchers' system. This means that the security of communications is increased further.

“I feel the most notable achievement is the successful chaos synchronization between two QCLs,” said Spitz. “For a long time, the possibility to generate temporal chaos in this type of structure was controversial because they rely on a different technology, in comparison with most of the semiconductor lasers, which overall makes QCLs more stable, so not really prone to chaos.

“A few years ago, we experimentally demonstrated that QCLs can generate temporal chaos, and we now took this one step further by achieving private communication based on chaos synchronization.”

So far, the researchers merely described a proof of concept of their proposed system, where the distance between the two quantum cascade lasers is merely of one meter. This is not a realistic configuration for free-space communication. However, they hope to improve their system, to make it more suitable for real-world implementations.

“We plan to increase this distance to hundreds of meters, then kilometers, in order to build an operational system,” said Spitz. “Apart from quantum cascade lasers, there are other mid-infrared semiconductor lasers, such as interband cascade lasers (ICLs). We plan to repeat the same experiment with ICLs, to determine the best configuration for private communication at mid-infrared wavelength.”