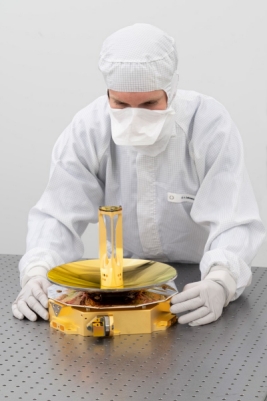 A collaboration between researchers at the Fraunhofer Institute for Applied Optics and Precision Engineering (IOF) in Jena and Hensoldt Optronics in Oberkochen has won a share of third prize in the 2021 Lothar Späth Awards.

Named after the former Jenoptik executive chairman and established to recognize outstanding collaborative innovations in the Baden-Württemberg and Thuringia regions of Germany, this year’s award celebrates the development of mirror optics that are set to fly on the European Space Agency’s “JUICE” mission in 2023.

Short for “JUpiter ICy moons Explorer”, the JUICE mission features an optical altimeter instrument that will be used to map the surface of Ganymede, the largest moon in our solar system.

Cosmic conditions
One of eleven scientific instruments on board the spacecraft, the “Ganymede Laser Altimeter” (GALA) will take high-precision measurements of the surface of the icy satellite, which shares certain similarities with Earth, including a molten iron core, magnetic field, and the presence of a lot of water.

GALA is based around a high-performance telescope developed by technicians from Hensoldt Optronics - previously part of Airbus - alongside a research group at Fraunhofer IOF led by Stefan Risse and Henrik von Lukowicz.

They delivered an optical telescope that is able to handle extreme environmental conditions in an ultra-high vacuum, needed to survive rocket launch and dramatic temperature fluctuations, as well as extreme cosmic radiation exposure.

According to the team, the GALA instrument will become the world's first deep-space laser altimeter to be used at a distance of approximately one billion kilometers from Earth, and will be able to measure the surface topography of Ganymede to a resolution better than 15 cm.

Space and beyond
With all tests now completed, GALA is scheduled to begin its journey in 2023, alongside ten other scientific instruments - including a visible/infrared hyperspectral imager, an ultraviolet imaging spectrometer, and a selection of cameras.

GALA will send laser pulses to the giant moon’s surface from a distance of around 500 kilometers, and determine the distance to the surface via back-scattered signals.

To capture the required data, the instrument needs a high-precision laser receiving unit. Fraunhofer IOF, which developed a special mirror telescope to achieve the 15 cm resolution, believes that the technology should have a wide range of applications beyond space research.

Those could include Earth observation, security technology, remote sensing, laser links between satellites and ground stations, and even quantum optics and quantum optical encryption technologies.

• Members of the Lothar Späth Award jury include former German Chancellor Gerhard Schröder, and Günther Oettinger, who was previously Minister President of Baden-Württemberg, and also a European Union Commissioner.

First prize in this year's award went to team from NovaPump and Jena University Hospital that has developed a new type of heart pump said to significantly increase the survival chances of acute heart patients.