European Space Agency “JUICE” mission will analyse moons of the giant planet in a series of fly-bys in twenty years’ time. 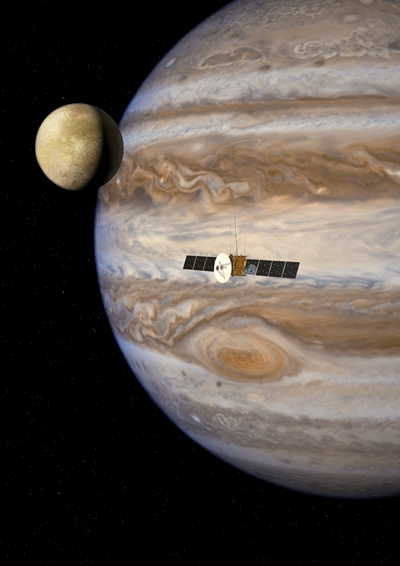 The European Space Agency (ESA) has selected the instruments that it will deploy on its forthcoming mission to analyse the moons of Jupiter, with photonics kit featuring heavily.

Known by the acronym “JUICE” (short for “JUpiter ICy moons Explorer”), the spacecraft is designed to explore the worlds around giant gas planets, and the potential for life to emerge within them.

After a seven-year cruise to the Jovian system following a planned launch in June 2022, JUICE will then spend three and a half years performing a dozen fly-bys of Callisto, the most heavily cratered object in the Solar System, and will fly past Europa twice in order to make the first measurements of the thickness of its icy crust.

The craft will end up in orbit around Ganymede, the largest moon in the Solar System, where it will study the moon's icy surface and internal structure, including its subsurface ocean. Ganymede is the only planetary satellite known to generate its own magnetic field, and JUICE will observe the unique magnetic and plasma interactions with Jupiter's magnetosphere in detail.

Dmitrij Titov, study scientist at ESA for the JUICE mission, said in the agency’s announcement: "Jupiter and its icy moons constitute a kind of mini-Solar System in their own right, offering European scientists and our international partners the chance to learn more about the formation of potentially habitable worlds around other stars."

Optics hardware:
Of the eleven instruments on board JUICE, five feature optical equipment. They include:

• a laser altimeter to analyze the tidal deformation of Ganymede and the morphology of the surface of the moons. It will feature a single 1064 nm beam with a 20 meter spot at a distance of 200 km, and a pulse rate of 20-90 Hz.

• a visible/infrared hyperspectral imager (400-5200 nm) to look at the composition of non-water ice components on Ganymede, Europa and Callisto, plus the state and crystallinity of water ice. On Jupiter itself, it will track of tropospheric cloud features, characterization of minor species, aerosol properties, hot spots and aurorae.

• an ultraviolet imaging spectrometer, with a spectral range from 50 nm in the extreme UV to 320 nm, will be used to analyze the composition and dynamics of the atmospheres of Ganymede, Europa, and Callisto.

• a narrow-angle camera will observe local geography on the three moons and Jupiter’s cloud dynamics in detail. Its 1024 x 1014 sensor will provide color and multispectral imaging capability with a 1.5° field of view.

• a wide-angle camera will observe global morphology of Ganymede’s surface, plus global to regional scale morphology of Callisto and Europa. Again, a 1024 x 1024 sensor will feature, this time with a 117° field of view.

Other equipment on board will include ice-penetrating radar, a sub-millimeter wave instrument to analyze wind speeds and temperatures, a magnetometer and a radio and plasma wave instrument.

NASA is partnering with ESA to provide three of the instruments, including the UV Spectrometer. The principal investigator for that piece of kit is Randy Gladstone of Southwest Research Institute in San Antonio, Texas.

According to NASA, the UV spectrometer will acquire images to explore the surfaces and atmospheres of Jupiter's icy moons and how they interact with the Jupiter environment, as well as determine how Jupiter's upper atmosphere interacts with its lower atmosphere, ionosphere and magnetosphere. It will also provide images of the aurora on both Jupiter and Ganymede.