UK firm’s precision optical equipment will be used to test laser altimeter in advance of 2022 launch. 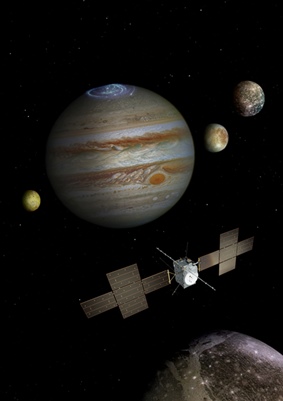 Precision mirrors from UK-based Optical Surfaces will be used to test a key piece of equipment destined for a rendez-vous with Jupiter and its icy moons in more than a decade’s time.

The company has just revealed its selection by sensor firm and former Airbus defense unit Hensoldt Optronics, to provide three mirrors for optical verification testing of a telescope on board the European Space Agency’s “JUICE” mission.

Based in Oberkochen, Germany, Henstoldt Optronics draws on decades of experience at nearby Carl Zeiss, and its name refers to the 19th-century German optics and precision mechanics pioneer Moritz Carl Hensoldt.

Parabolic and flat mirrors
Scheduled for launch in 2022, JUICE (short for “JUpiter ICy moons Explorer”) will carry 11 different instruments to study Jupiter’s moons in unprecedented detail – with five of those pieces of kit based heavily on optics and photonics technology.

Optical Surfaces will manufacture and supply a 550 mm-diameter off-axis parabolic mirror and two identical folded flat mirrors (each 600 mm in diameter) for optical verification testing of the Ritchey–Chrétien telescope on board the “GALA” instrument.

GALA is the acronym for the “Ganymede laser altimeter”, which will be used to study tidal deformation caused by the huge gravitational effect of the planet on its largest moon (Ganymede is the largest satellite in the solar system, and only slightly smaller than Mars).

The GALA kit features a single 1064 nm beam with a 20 meter spot at a distance of 200 km, and a pulse rate of 20-90 Hz. The lightweight Ritchey-Chrétien telescope incorporates precision optics capable of providing topographical vertical resolution of less than 5 m, and of accurately measuring radial tidal deformations of the moon’s “ice shell”.

Optical Surfaces’ sales manager Aris Kouris said in a release announcing the firm’s selection: “To be chosen as a supply partner to help enable the JUICE mission is a great honour. Drawing upon our many decades’ experience in building telescope systems, we were able to propose a solution to overcome the considerable difficulties posed by the manufacture and testing of the high-precision optics.”

Orbiting Ganymede
Due to arrive in Jupiter space after a nearly eight-year journey following the planned 2022 launch, the JUICE mission will first orbit the planet before its path is adjusted to take in several fly-bys of Ganymede, Europa, and Callisto – three of Jupiter’s four Galiean moons.

It will end up in orbit around Ganymede, becoming the first space mission to do so. All three of the planet-sized satellites are thought to have oceans of liquid water beneath their icy crusts, and ESA says that the mission is expected to provide clues about the potential for such moons to offer habitable environments.

Other photonics hardware on board includes a visible-infrared hyperspectral imager to observe cloud features on Jupiter and ice composition on the three satellites, as well as an ultraviolet imaging spectrometer to analyze the atmospheres of Ganymede, Europa, and Callisto.

Airbus was selected as the prime contractor for the mission in 2015, signing a €350 million agreement with ESA. And earlier this year, ESA said that JUICE had passed its “ground segment requirements” review, meaning that the team was on track to complete the instrument development stage as expected.

Giuseppe Sarri, the JUICE project manager at ESA, said in January that 2018 would be a “crucial” year for the program, with three key milestones to come.

Those include a Sun illumination test to simulate conditions of the planned Venus fly-by and their effect on a full-scale thermal model of the spacecraft; the start of the engineering model test campaign; and starting the critical design review at the end of the year.

"So far all preparation activities are running as expected, in line with the planned launch date on 20 May 2022,” Sarri stated.