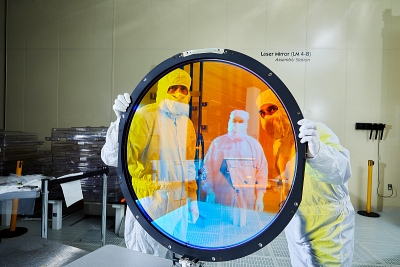 The last of the enormous optical components for what will become the world’s highest-resolution digital camera has been delivered to the SLAC National Accelerator Laboratory at Stanford University.

Engineers at the California facility will now assemble the giant “LSSTCam” camera, before its anticipated shipment to the Vera C. Rubin Observatory (previously known as the Large Synoptic Survey Telescope) in Chile next year.

Camera integration
Mounted at the National Ignition Facility optical assembly building within Lawrence Livermore National Laboratory (LLNL), the sixth and final optical filter was - like the other five - fabricated at Thales Space SESO, using glass raw material initially shipped from the US.

Optics specialists at Thales then shaped and polished that glass into the required form between 2016 and 2020. Each of the components measures nearly a meter in diameter, and weighs around 40 kg.

The six filters were then transported to Materion’s facility in Massachusetts for coating inside a custom-built chamber, before shipment to the LLNL team.

If all goes according to plan, the 8.4 meter-mirror Rubin telescope should begin operations in 2024. The 3.2-billion-pixel LSSTCam is at the heart of a mission to conduct a decade-long survey of the night sky that will generate an unprecedented set of astronomical imagery.

The CCD imager will take a 15-second exposure every 20 seconds, with the telescope re-pointed every five seconds.

As a result, the telescope is expected to end up imaging some 20 billion galaxies over ten years, with the data helping researchers better understand the true nature of dark matter and dark energy. The design also allows millions of celestial objects much closer to Earth to be tracked.

“We’re all very excited,” said LLNL engineer Vincent Riot, the Rubin LSSTCam manager for the past four years. “The optical lenses and filters have been a long time in the making. This project has been under way for about ten years. Now, we’ll soon see the integration of all of the camera’s components as part of the telescope’s commissioning.”

Optics in good shape
The arrival of the last filter component - designated for the “r-band” - comes two years after the LLNL team delivered what is believed to be the world’s largest high-performance optical lens to SLAC for the same project.

The filters have been labelled u, g, r, i, z and y, with each transmitting light from a segment of the spectrum, across the near-UV, visible, and near-IR spectral range.

The r-band filter is expected to be one of the most regularly employed by LSSTCam, with LLNL saying that it should be particularly useful for testing the camera, as standard techniques can be used to verify its optical performance when this filter is in place.

Justin Wolfe, an LLNL optical engineer and optics subsystems manager for LSSTCam, said that the coating uniformity requirements over such a large area, and the sheer number of different parties involved in the filter production had made for a particular challenge.

“It is a complex process to get a substrate ready for coating when you have three different vendors, 18 months of preparation and an irreversible coating process if mistakes are made,” he noted.

“Optics and especially optical filters are notorious for causing significant delays in projects like this one. Given unanticipated delays the last couple of years due to the pandemic and other factors, it is a great relief to know that the optics have all been delivered in good shape in time to meet the needs of the project.”