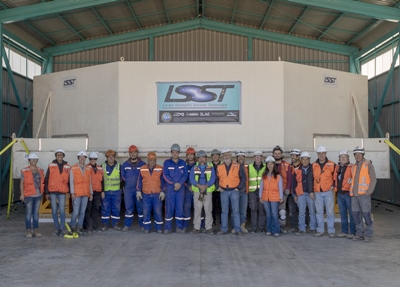 The giant combination mirror that will collect light for the Large Synoptic Survey Telescope (LSST) has arrived at the summit of the Cerro Pachón mountain ridge in Chile, bringing “first light” at the observatory at step closer.

Cast more than a decade ago at the Richard F. Caris Mirror Laboratory in Tucson, Arizona, the 8.4 meter-diameter “M1M3” component comprises both the primary and tertiary optic for the telescope, which is being built to create a vast catalog of celestial objects.

Completed in 2015 after years of grinding and polishing in Tucson, the mirror has spent much of the past year in a shipping crate, ready for the journey to the Andes. Following final tests in March, it was moved to Houston and loaded onto a boat for a four-week voyage to the port of Coquimbo in Chile, via the Panama Canal.

The final leg of the journey to the mountain-top site took place on a 72-wheeled truck, and concluded in the early hours of May 10.

Fast scanning
Described by LSST as the “heart” of the telescope, the mirror’s hybrid design is unique for an observatory of this size.

“Combining two astronomical mirrors with different curvatures into one surface had not been done before, but it is this unique design that will enable LSST to combine speed with a crisp, wide field of view,” explains the multi-national organization.

That wide field of view and ability to move quickly is crucial, because LSST is expected to capture images of millions transient objects, including comets and Earth-orbiting asteroids, every night, as well as some 40 billion stars and galaxies during a decade-long survey.

LSST’s chief scientist Tony Tyson said: “Combining the primary and tertiary mirrors into two mirrors fabricated on the same Pyrex blank creates a 10-square-degree field of view with very low distortion. This enables an unprecedented broad science reach from cosmology to the time domain - all with a single, comprehensive sky survey.”

On this spectacular sunny day, the @LSST M1M3 reached the summit! The drive from the gate at the base of the mountain to the top took about six hours. Now the mirror will hang out in a swanky storage shed and wait for other telescope parts to arrive. #NSFScience pic.twitter.com/2el70klubF

Critical components
The M1M3 optic joins the 3.4 meter-diameter secondary mirror - said to be the largest convex-shaped mirror ever manufactured - at the observatory site. “M2” arrived last December, shortly after an enormous optical coating chamber made the same journey.

Other critical components include a giant CCD array measuring 3 meters by 1.65 meters, made up of nearly 200 large-scale individual sensors fabricated by Teledyne’s e2v division.

That huge 3.2 gigapixel sensor is required to meet the observatory’s field-of-view requirements, and will use meter-scale optical components to collect light across the 300-1000 nm wavelength range once LSST is operational.

With several of the major components now at Cerro Pachón, observatory officials say that LSST should begin operations in 2022. Ultimately, the survey is expected to improve our understanding of dark matter and dark energy significantly, and to help explain the distribution and formation of galaxies including our own Milky Way.