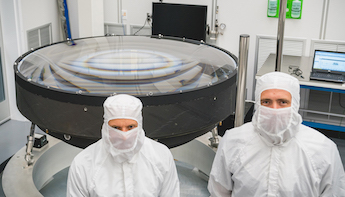 A lens measuring 1.57 meters across and thought to be the largest high-performance optical lens ever fabricated has arrived at SLAC National Accelerator Laboratory, a major step towards its eventual destination in a digital camera used by the Large Synoptic Survey Telescope (LSST).

The full camera lens assembly, including the large L1 lens along with a smaller companion L2 lens measuring 1.2 meters in diameter, was designed by Lawrence Livermore National Laboratory (LLNL) and built over five years by Ball Aerospace and subcontractor Arizona Optical Systems. A third lens, L3, 72 centimeters in diameter, will also be delivered to SLAC within a month.

SLAC is managing the overall design, fabrication and final assembly of LSST’s $168 million, 3,200-megapixel digital camera, which is said to be now 90 percent complete and due to be finished by early 2021.

"The success of the fabrication of this unique optical assembly is a testament to LLNL's world-leading expertise in large optics, built on decades of experience in the construction of the world’s largest and most powerful laser systems," said Scot Olivier, who has been involved in Lawrence Livermore’s LSST project for more than a decade.

According to the LSST Corporation, the digital camera in the LSST is the largest digital camera ever constructed. The final structure will measure 1.65 x 3 meters and weigh 2,800 kg. It is a large-aperture, wide-field optical imager capable of viewing light from the near ultraviolet to near infrared.

When assembled, the L1 and L2 lenses will sit in an optics structure at the front of the camera body; L3 will form the entrance window to the camera's cryostat, containing its focal plane and associated electronics.

The CCD digital camera will record images seen by the telescope's main optical system, itself a novel three-mirror design combining 8.4-meter primary, 3.4-meter secondary and 5-meter tertiary mirrors. First light at LSST is anticipated in 2020, with full operations commencing in 2022.

Designing a digital camera capable of meeting the LSST's ambitious imaging goals has led LLNL to tackle a number of challenges, according to the project team. The final detector format employs a mosaic of 189 16-megapixel silicon detectors arranged on 21 "rafts" to provide the total 3.2 gigapixels resolution.

The camera will take a 15-second exposure every 20 seconds, with the telescope being repointed and settling within five seconds, requiring an exceptionally short and stiff structure. This in turn implies a very small f-number, along with very precise focusing of the camera.

LSST documentation indicates that the 15-second exposures are a compromise to allow spotting both faint and moving sources. Longer exposures would reduce the overhead of camera readout and telescope repositioning, allowing deeper imaging, but fast-moving and near-Earth objects would move significantly during an exposure. Each spot on the sky is to be imaged with two consecutive 15 second exposures, to reject cosmic ray hits on the CCDs.

"Any time you undertake an activity for the first time, there are bound to be challenges, and production of the LSST L1 lens proved to be no different," commented Justin Wolfe of LLNL. "You are working with a piece of glass more than five feet in diameter and only four inches thick. Any mishandling, shock or accident can result in damage to the lens. The lens is a work of craftsmanship and we are all rightly proud of it."