128-ton system will be used to coat huge mirror optics in situ, with one already en route to the summit of Cerro Pachón. 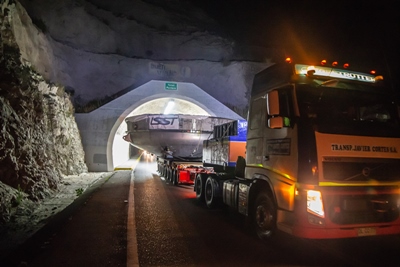 A chamber for coating the giant optical components of the Large Synoptic Survey Telescope (LSST) has been delivered to the summit of Cerro Pachó in Chile, as the project’s engineering team prepares for the arrival of its mirrors.

Transported from Deggendorf in Germany over the course of 15 weeks and via the Panama Canal, the 128-ton coating chamber is said by LSST to be the largest single piece of equipment to arrive at the summit site so far.

It should be followed by the 8.4 meter-diameter mirror comprising both the primary and tertiary reflecting components in mid-2019, while the 3.4 meter secondary mirror - built by US contractor Harris Corporation - has just been loaded onto a Chile-bound boat in Albany, New York, and is expected to arrive in the country early December (see LSST's tweet, below).

The LSST, which will carry out wide-field surveys of the southern night sky once completed, will also feature one of the largest digital cameras ever built, a 3.2 gigapixel sensor being assembled by a team at Stanford University.

With system “first light” anticipated in 2021 and its decade-long survey of a large swathe of the night sky slated to start in October 2022, the LSST will collect a vast database of imagery – and should end up generating a catalog of some 40 billion objects, ultimately helping astronomers to better understand the nature of dark energy and dark matter, and the formation of galaxies.

Smooth journey
Built by sub-contractor Von Ardenne, the coating chamber will be used to deposit a thin layer of aluminum on the “M1M3” primary/tertiary mirror, and silver on the “M2” secondary mirror.

LSST coatings engineer Tomislav Vucina said in a release from the NSF-funded organization: “The LSST Coating Chamber will be the largest, most modern, and most powerful mirror coating mechanism used by any telescope in the world.”

Transported from the Port of Coquimbo in Chile to the mountain summit on specialized trucks and with a police escort, its marathon journey from Germany appears to have been completed without any major hitches.

LSST project manager Victor Krabbendam said: “It was gratifying to see so much support from the local communities, and the extensive cooperation between AURA [the Association of Universities for Research in Astronomy], the Chilean authorities, and the many experts involved in the transportation activities. Considering the scale of the cargo, and the distance it needed to go, the move went remarkably smoothly.”

Back in June, Krabbendam told delegates at SPIE’s Astronomical Telescopes and Instrumentation symposium that the LSST project was “on track” for successful completion, and that the M1M3 component would arrive at the summit site in summer 2019. 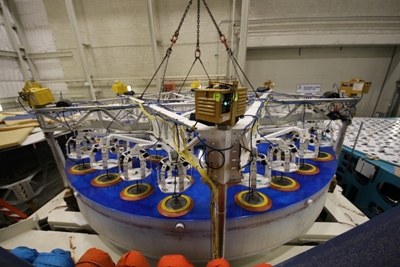 'M1M3' mirror at the Arizona laboratory

Mirrors in motion
According to LSST’s latest newsletter the huge combination mirror was recently moved out of a hangar at Tucson International Airport, where it had been stored for the last three years following fabrication at the University of Arizona (UA), and lifted onto its cell carrier.

Over the next few weeks, work at UA’s Richard F. Caris Mirror Lab will focus on the integration of the mirror and cell, installing actuators and other electronics. “These activities will be followed by functional testing of the assembled system,” reported LSST. “The [M1M3] mirror is scheduled to move under the Mirror Lab’s interferometry tower for optical testing in January, 2019.”

However, the M2 optic - said to be the largest convex-shaped mirror ever made - is already on a ship sailing to Coquimbo, where it is expected to arrive in early December. That appears to be slightly behind the schedule previously outlined by Krabbendam, although in June the entire LSST effort was said to be proceeding on budget and with money available for contingencies.

Using more meter-scale optics, it will collect light across the 300-1000 nm wavelength range once in operation, producing a 3.2 gigapixel image every two seconds. Over the duration of the survey it will create richly detailed images of almost the entire southern night sky.

Recently the @LSST Secondary Mirror (M2) was transported from @HarrisCorp to the port of Albany, NY, where it was loaded onto the BBC Challenger and is now headed for Coquimbo, Chile. It should be a pretty direct trip—estimated arrival is at the beginning of December. #NSFScience pic.twitter.com/NorYQJeUwB