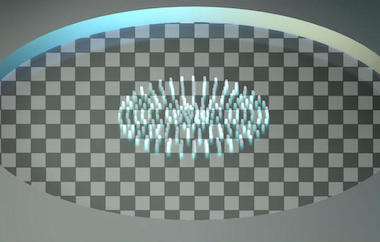 No spikes: metasurfaces with holes

Metamaterials usually rely upon a pattern of raised nanostructures manufactured on an optical surface to produce their counter-intuitive properties.

A project at the Harvard SEAS lab of metamaterials expert Federico Capasso has now demonstrated that such an approach isn't the only one, by creating a metalens with a surface patterned with holes.

As published in Nano Letters, the holey approach could lead to flat optics components whose metasurfaces are more rugged and robust than ones made by the traditional method.

The principle behind nanoscale pillars as the active component of a metasurface is that tall formations maximize the interactions between the arriving incident light and the naostructured material.

However, although manufacturing procedures for these materials have made great strides, it can still be challenging to create tall pillars or fins of the necessary size without them tipping over or breaking.

Building on existing studies of how flat optics patterned with shallow holes can influence mid-infrared or terahertz beams, the Harvard team designed metalenses with ultradeep via-holes in 5-micron thick free-standing silicon membranes, with the aspect ratio of the holes approaching 30:1. It is the first time that holes with such an aspect ratio have been used in metaoptics, according to the project team, and the metalenses were fabricated using conventional CMOS-compatible semiconductor processes and standard materials.

"If you tried to make pillars with this aspect ratio, they would fall over,” said Daniel Lim of Harvard SEAS. "The holey platform increases the accessible aspect ratio of optical nanostructures without sacrificing mechanical robustness."

Trials showed that a flat 2-millimeter-diameter metalens patterned with holes in a series of 2000 thin rings each 0.5-microns wide could successfully focus incident infrared light into a diffraction-limited spot, thanks to the changes in optical path length of light through the holey meta-atoms.

Future work could see the holes filled in with nonlinear optical materials, for multi-wavelength generation and manipulation of light, or with liquid crystals to achieve active modulation of light's properties, according to the Capasso group.

"This approach may be used to create large achromatic metalenses that focus various colors of light to the same focal spot, paving the way for a generation of high-aspect ratio flat optics," said Federico Capasso.

In September 2021 the company demonstrated its metalens technology using a near-infrared wavelength imaging lens with a single metasurface designed for 3D sensing and face recognition.

NILT's selling point for its MOEs is in-house prototyping capability secured by e-beam lithography and mass production by nanoimprint lithography, "enabling us to rapidly prototype MOEs and scale to mass production faster than anyone else," according to the company.