Silicon continues to be the primary element of choice for designing commercial solar panels, despite the development of a plethora of promising alternatives in recent years. Abundant and relatively inexpensive, silicon is the building block for many important electronic technologies, including solar cells. However, silicon remains a relatively poor absorber of sunlight.

As described in a paper published in Nano Letters, Los Alamos National Laboratory researcher Alejandro Lopez-Bezanilla and research collaborator Peter Littlewood (Argonne / U Chicago) predict and provide theoretical insight into the electronic, mechanical, and optical properties of Si22, a new material composed of silicon atoms arranged in a pentagonal geometry.

The researchers say that the “new silicon allotrope shows promise for excellent photovoltaic performance and may also have important applications in areas such as carbon sequestration and quantum computing.”

Said Lopez-Bezanilla, “We’re studying how to improve the use of solar radiation by innovating in new materials. The model material, silicon, is potentially improved with this allotrope. This is the kind of brick you want to start building a solar cell.”

“If you have energy from the sun impacting the electrons, and making them jump, but there is no available energy level, you have nothing,” said Lopez-Bezanilla. “The new allotrope is able to maximize the absorption of sunlight due to the appropriate position of electronic energy levels defining its band gap.”

The research by Lopez-Bezanilla and Littlewood also focuses on the creation of magnetic moments. When hydrogen is introduced into Si22 cages, the electron orbitals impacted are very localized nearby the foreign atom. That is, the magnetic moment created is not distributed widely throughout the atomic structure, but concentrated and protected from the surrounding environment.

Lopez-Bezanilla analyzed the phonon modes of the new material. In Si22, at very low temperatures the type of Si atoms H attaches to slightly vibrate while the surrounding atoms are not mobile. The stability could provide an advantage for quantum computing, where the infrastructure operates at very low temperature to reduce vibration that interferes with computing processes.

Si22 also has potential for carbon sequestration – to mitigate climate change, for example. With its hollow structure, it could allow for molecules to be incorporated within the compound. That approach could enable carbon dioxide to be sequestered and caged inside the structure. 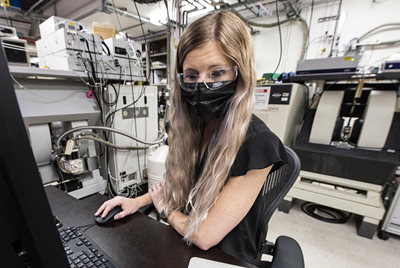 Researcher Abigail Meyer of Colorado School of Mines and NREL.

Researchers at the U.S. Department of Energy’s National Renewable Energy Laboratory (NREL) and Colorado School of Mines are applying a new technique to identify defects in silicon solar cells that cause a drop in efficiency, known as light-induced degradation.

Light-induced degradation, or LID, shaves the efficiency of silicon solar cells by about 2%, which adds up to a significant drop in power output over the 30- to 40-year lifespan of the technology deployed in the field.

“Some of the modules are stabilized completely. Some of them are only half-stabilized,” said Abigail Meyer, a Ph.D. candidate at Mines and a researcher at NREL. She is the lead author of a new paper detailing efforts to pinpoint the source of the LID phenomenon. The work is described in Energy & Environmental Science.

The collaboration between NREL and Mines researchers relied on electron paramagnetic resonance to identify defects responsible for the LID. For the first time, the microscopic examination revealed a distinct defect signature as the sample solar cells became more degraded by light.

The defect signature disappeared when the scientists applied the empirical “regeneration” process to cure the LID that industry has adopted. To their surprise, the researchers also found a second, “broad” EPR signature affected by light exposure, involving many more dopant atoms than there are LID defects. They hypothesized that not all atomic changes induced by light lead to the LID.