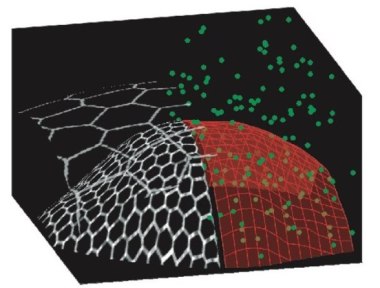 Use less light, do less harm

As fluorescence microscopy becomes capable of imaging larger specimens at increased resolution, so the issue of light dosage and the potential damage it causes becomes more important.

Several approaches to controlling the phototoxicity experienced by fragile biological tissues have been developed, notably light sheet microscopy in which only thin slices of the sample are illuminated by a structured laser beam.

Other strategic limitations to the excitation power and dwell time have also been investigated, in techniques such as two-photon fluorescence and STED microscopy; but these approaches gather information at the single-pixel scale in order to then modulate the light dose, so equal scanning of all pixels is ultimately involved.

A project at France's Fresnel Institute, based at Aix-Marseille University, has now developed a smart microscopy platform that automatically calculates where to send the illuminating laser pulses in sequence, so as to image the structures of interest in a tissue sample while reducing the chances of photobleaching.

Published in Light Science & Applications, the team's adaptive scanning fluorescence microscope has initially been optimized for the unsupervised imaging of cell sheets, such as those underlying many embryos and organs.

"The starting point of this project was the observation that most biological tissues have a well-characterized architecture," commented the Fresnel Institute team. "In particular, most embryos are organized as surfaces - sheets of cells - that are curved in space."

Microscopes do not typically adapt their operation to suit this architecture, instead scanning a laser in the whole 3D space that contains the embryo. This is inefficient in terms of speed and quantity of light irradiating the sample, according to the project.

The approach developed at the Fresnel Institute is for the microscope to automatically adapt its scanning pattern to the morphology of curved biological surfaces, without prior knowledge of the surface.

After an initial delineation of the surface through acquisition of a deliberately small subset of sample space, the platform can then scan only a thin shell around the estimated surface of interest, allowing the light dose to be lowered when the tissue is curved.

The team also exploited the presence of key cell sites called adherens junctions, which effectively form a mesh of cell contours on the tissue surface. These sites, once labelled, be used as fluorescence markers for the imaging operation.

"The principle is to dynamically adapt the scanning scheme to image epithelial surfaces via an algorithmic search for informative voxels, in our case the voxels labelled by the junctional marker and distributed along the epithelial surface," said the team in its published paper. "We drastically reduce the number of scanned voxels in the imaging process, by exploiting the geometrical organization of biological tissues in 3D."

Trials using developing larva of Drosophila melanogaster fruit flies were carried out, with the device used for imaging structures in the developing wing and epidermis. The scanning approach yielded more than a 20-fold reduction in light dose for successful imaging of individual areas, and more than 80-fold compared to a full scan of the volume, according to the project's paper.

"The method opens a new way to image over long periods the behavior of very fragile objects such as embryos and organoids," noted the Institute. "It could be very simply adapted on many of the commercial microscopes that are found in the imaging facilities in biology institutes."