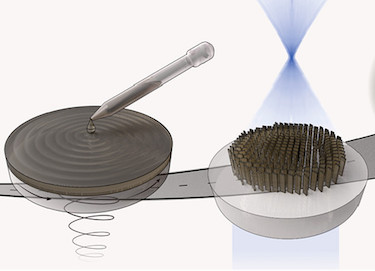 Metasurfaces, whose optical properties are derived from a manufactured nanopatterend surface rather than just component shape or chemical composition, are attractive materials for several optical applications.

The production of metasurfaces has to date tended to involve expensive and complex manufacturing steps, however, presenting a barrier to their wide adoption.

A project at Sweden's Chalmers University of Technology has now developed a new methodology for making phase-gradient metasurfaces, intended to reduce the processing time and the safety hazards involved. The work was published in ACS Photonics.

"Metasurfaces are currently fabricated by highly demanding procedures that typically involve deposition of a transparent dielectric, followed by lithographic patterning, additional depositions, etching, and so on," commented the project in its published paper.

"A cost-effective alternative material platform and fabrication method that is accessible, scalable, and based on only nontoxic disposable materials could dramatically accelerate the impact of metasurface flat optics across society."

The team's solution involves the use of a standard negative resist material employed in semiconductor manufacture, one that can be hardened through electron beam exposure. If properly patterned, the resist material can form the metasurface itself, limiting the manufacturing process to essentially a single lithography step.

In particular, the project identified that using an off-the-shelf polymer resist material processed in this way could offer a route to polymeric metasurfaces, a class of metamaterial known to be attractive for optical applications but not to date widely explored.

The team's method involves spin-coating the chosen polymeric negative resist material onto a glass plate, and then patterning it with a single electron beam lithography exposure, to create the high aspect ratio nanofin structures on the surface which generate the metamaterial behavior.

"We can draw detailed patterns in the plastic film, which after development will constitute the metasurface," said Daniel Andrén of Chalmers. "The resulting device can focus light just like a normal camera lens, but it is thousands of times thinner and can be flexible too."

To test the principle, the project created macroscopic 1-centimeter diameter positive lenses, consisting of more than 600 million individual nanoscale elements, manufactured in a single afternoon of lab work according to the team. Imaging trials on a 400-micron diameter object proved that the resulting image clearly displayed the finest details of the target.

Gratings capable of exhibiting anomalous reflection properties and cylindrical metalenses were also created, demonstrating that the manufacturing approach was compatible with both flexible plastic supports and metallic mirrors as substrates.

The method could prove particularly valuable for the creation of achromatic flat optical components, designed to limit the chromatic aberrations that can be a weakness of metasurfaces. The refractive index dispersion of polymers is generally low, according to the project team, which may make them a suitable material for such components.

Last year the Harvard lab of metamaterials pioneer Federico Capasso created an achromatic metalens comprising non-symmetric nanofins, able to focus light across the visible spectrum without aberrations, another demonstration of the potential for such achromatic metamaterials.

"Our method could be a step towards large-scale production of metasurfaces," commented Ruggero Verre of Chalmers' Department of Physics. "That is the goal we are already working towards today. Metasurfaces can help us create different effects and offer various technological possibilities. The best is yet to come."