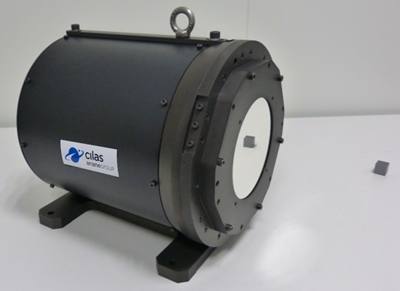 French firm CILAS, which specializes in lasers and photonics technologies for military and astronomy applications, has signed an agreement to make some critical optical components for the Thirty Meter Telescope (TMT) observatory.

The Orléans company, a subsidiary of aerospace giant Ariane, is to fabricate a pair of deformable mirrors that will sit at the heart of the TMT’s adaptive optics system, used to correct for atmospheric distortions.

Once completed, those mirrors – one with 3125 actuators and the other with 4548 actuators - will represent the largest optical components based on piezoelectric technology ever fabricated.

They will be used in conjunction with a laser guide star system, fired high into the atmosphere above the Hawaiian observatory, to correct wavefront deformations generated by atmospheric turbulence.

Giant optics
One of a new generation of giant telescopes that will provide a step-change in terrestrial observing capability, TMT will be used by astronomers to image everything from small near-Earth asteroids to exoplanets, distant galaxies, and some of the very earliest light sources to form in the universe.

Like its peers the Extremely Large Telescope (ELT) and Giant Magellan Telescope (GMT), the TMT’s primary mirror will in fact be constructed from hundreds of individual reflecting segments – rather than a single reflector, as is the case with most of the large optical telescopes in use today.

Each of the new class of giant telescopes will feature state-of-the-art adaptive optical systems, although because each of the designs are somewhat different, the requirements of the adaptive systems need to be customized in each case.

The TMT’s primary mirror, which has a short focal ratio so that it can be housed in a relatively compact enclosure design, is based on 492 individual segments, each separated by just a couple of millimeters.

Many of those segments, all 45 mm thick, are already being made from a special zero expansion glass called Clearceram, developed by optics firm Ohara.

According to TMT, the “first light” adaptive optics architecture for the observatory will provide near-diffraction-limited wavefront quality and broad sky coverage in the near infra-red spectrum for the initial scientific instruments. 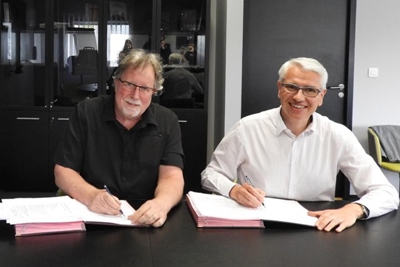 First light scheduled for 2027
Backed by a multinational consortium of academic and government organizations, the TMT is currently scheduled for first light in mid-2027. The initial construction schedule was delayed because of a long-running legal dispute with some local Hawaiians about building another observatory on the Mauna Kea summit, which has great religious and cultural significance for many.

An alternative site for the TMT at La Palma in the Spanish Canary Islands has even been considered, although late last year the Hawaii Supreme Court ruled by majority decision that the project should go ahead as planned at the Mauna Kea site.

CILAS has long-standing expertise in adaptive optics, with developmental work for the French military stretching back as far as 1973. In the late 1980s the company then provided the first demonstration of real-time correction of wavefront distortion generated in the Earth’s atmosphere.

Significant applications of CILAS’ technology in astronomy include a 60-element curved adaptive optical system used by the 8.2 meter-diameter Very Large Telescope (VLT) observatory in Chile, and a 188-element bimorph mirror for the Subaru Telescope, also sited at Mauna Kea.

CILAS has also fabricated deformable mirrors for some of the world’s highest-power laser systems, including the Orion laser facility at the UK’s Atomic Weapons Establishment, and the “ELFIE” laser at the Laboratoire pour L’utilisation des Lasers Intenses (LULI) in France.