FLIR bags $23M in orders from US Customs and Border Protection

Surveillance vehicles equipped with twin infrared imagers and laser rangefinder account for a major chunk of the latest award. 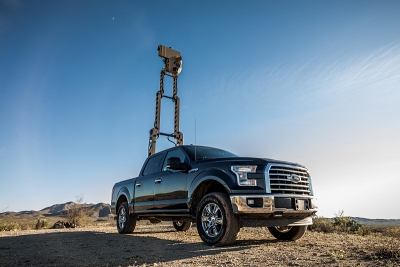 Thermal imaging giant FLIR Systems says it has won a clutch of contracts with US Customs and Border Protection (CBP) that could end up being worth more than $23 million in sales.

Mobile surveillance
A key element of the award is a contract for delivering the next generation of FLIR’s “Lightweight Vehicle Surveillance System” (LVSS), which is intended to improve mobile surveillance capability. CBP has ordered 19 of these vehicles, for deployment on the northern and southern US borders.

According to FLIR, each LVSS is able to track up to 500 objects at once, at ranges exceeding ten miles. “LVSS is well suited to missions that call for speed, mobility and flexibility, including protecting remote borders, shorelines, and forward operating bases,” states the firm.

FLIR adds that a single operator can deploy and operate the vehicle’s 16-foot mast (seen in photo, above) from the cab of a pickup truck in less than 30 seconds. At the top of the mast is one of FLIR’s “TacFLIR 380-HD” sensor units.

Company literature explains that each of these surveillance sensor units - which are also deployed in airborne and maritime applications - features a MWIR camera with a native 1280 x 720 resolution, as well as high-definition CCD and SWIR cameras.

The MWIR camera is based around an indium antimonide (InSb) sensor operating over the 3-5 µm wavelength range, alongside an indium gallium arsenide (InGaAs) sensor covering the SWIR region.

Boson LWIR core
Other elements include a laser range finder with 30 km range, a laser pointer, and 6-axis stabilization to provide the TacFLIR 380-HD with “unmatched” geolocking and target tracking capability.

Roger Wells, general manager of FLIR’s “unmanned systems and integrated solutions” business unit, said in a company release that the LVSS and other technologies ordered by CBP would provide “nimble, rugged and reliable surveillance solutions” in even the toughest environments.

The StormCaster-T is based around one of FLIR’s tiny, uncooled “Boson” thermal cameras. The long-wave infrared (LWIR) sensor is said to provide powerful object detection, recognition, and identification both day and night, combined with a continuous zoom lens for long-distance surveillance and reconnaissance.