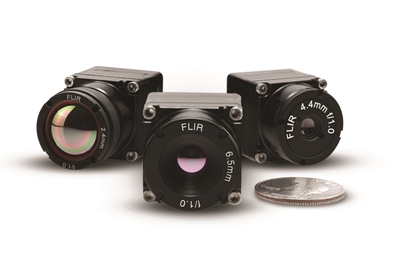 by Ford Burkhart in Baltimore
FLIR made a big splash on the industry events stage at SPIE’s Defense and Commercial Sensing (DCS) gathering on the first day of the event’s industry exhibition in Baltimore: it launched its latest innovative IR camera, and by far its smallest.

The firm’s tiny “Boson” is named for the category of sub-atomic particles that, appropriately enough, includes the photon as a member.

The core, which features a 12-micron pixel pitch detector, is designed to be integrated into OEM products such as personal thermal vision systems.

“It is a successor, in a long line of FLIR camera cores,” he said. “This one is four times smaller than the previous generation, which was the Tau camera core, [and] which FLIR is still selling. The Boson is smaller, lighter, lower cost, and lower power. And it provides a lot more functionality, by an order of magnitude.”

Many interfaces are available, Boulanger said. To create a PVS (personal vision system) product, with many interfaces, “you need only the Boson core, and power circuits.”

FLIR will sell the Boson as a component, for example in a system using infrared imaging to look at moisture inside a house, or to mount on a small UAV (unmanned aerial vehicle) to fly over a house to seek if it is leaking heat. The Boson would be ideal, Boulanger said, because it only weighs 10 grams.

Intelligent imaging
Designers might also place the Boson in a web-connected surveillance and security device. “Inside the core,” Boulanger said, “there is so much calculation power, you can embed video analytics to find a person in a crowd, during surveillance; or to photograph persons approaching a high value asset, or your doorway. If someone crosses a line, it will find them and track them.”

The Boson would perform in many security and maritime applications, for example finding an object floating in water, or in a search for animals, or birds. “It’s a very intelligent imager,” Boulanger said.

On the product stage in Baltimore, FLIR also showed off its new camera that can “freeze” a speeding bullet. It was announced at Photonics West in San Francisco in February.

FLIR’s Chris Bainter, director of business development for R&D Science Solutions, based in Pasadena, California, presented the camera system, saying that it can photograph objects at a very high speed with high resolution, delivering clarity beyond earlier methods.

For example, it could photograph tests of airbags when a dangerous piece of metal might be flying out, to analyze safety issues, or record fire or a brief puff of smoke during product testing.