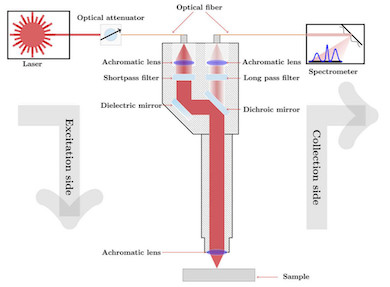 One of the most prevalent forms of oral cancer is oral squamous cell carcinoma (OSCC), for which the five-year survival rate has stubbornly remained at 50 percent for many years partly because diagnosis is usually made at a late stage.

Better identification of both OSCC and the non-malignant lesions that can precede it would help to reduce the impact of the disease, and optical techniques may offer a route to this goal.

"Raman spectroscopy is not only label-free and non-invasive, but it can potentially be used in ambient light conditions," said team leader Levi Matthies from UKE. "This makes it promising for use as a potential screening tool in the dentist's office."

The ability of Raman spectra to reveal the molecular composition of tissues has already been put to good use in identifying relevant biomarkers in prostate, cervical and other cancers, as well as improving our understanding of chemotherapy. But the technique has not as yet been widely used for spotting OSCC.

The Hamburg team has now evaluated a technique based on shifted-excitation Raman difference spectroscopy (SERDS), a background correction methodology for Raman spectroscopy developed in 1992 but here applied to studies of the oral cavity for the first time, according to the project team.

SERDS employs two excitation wavelengths, different by only a few nanometers, to acquire two Raman spectra consecutively at the same position. Since the same fluorophores are excited, both spectra have the same fluorescence background profile.

The project designed a compact and portable Raman sensor consisting of a tunable diode laser, a fiber coupled spectrometer and Raman probe. It then applied its platform to 37 patients enrolled at UKE, collecting Raman spectra from biopsy samples of clinically apparent conspicuous lesions as well as from OSCC samples.

The methodology involved the acquisition of 50 single spectra using an excitation wavelength of 784 nanometers, followed by a further 50 spectra from the same locations using 785 nanometers. Bespoke computational models then removed the considerable autofluorescence signal, before one spectra was subtracted from the other to reveal the raw Raman difference spectra, from which a pure reconstructed Raman spectra could then be calculated.

Comparison with conventional biopsy results showed that this approach was able to distinguish OSCC from non-malignant lesions with an accuracy of 88.4 percent, and OSCC from healthy tissue with an accuracy of 89.8 percent, thanks to the difference in spectral data from proteins, lipids and nucleic acid species present in different amounts in malignant and non-malignant lesions.

The next steps for the project will include expanding the approach to classify different precancerous conditions and grade their severity. Work to make the system more portable and increase the speed of the analysis to support real-time diagnosis is also underway.

"Our study shows the potential of Raman spectroscopy for revealing whether a lesion is cancerous in real time," said Levi Matthies. "Although it won’t replace biopsies any time soon, the technique could help reduce the lapse of valuable time as well as the number of invasive procedures."