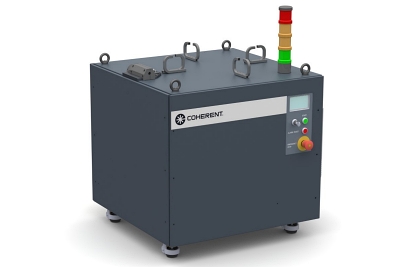 Laser giant Coherent has reported sales of $298 million for the quarter ending July 4, with new CEO Andy Mattes saying he was encouraged by the result amid the effects of Covid-19.

The pandemic has inevitably impacted the company’s ability to meet with customers directly, and bookings in the quarter were affected more than sales revenues.

Although the sales figure was up slightly from the figure of $293 million registered three months ago, Coherent’s book-to-bill ratio dropped below one, with Mattes saying that the pandemic had slowed demand across several markets.

The latest revenues are also down 12 per cent on the equivalent period in 2019, with the California-headquartered company posting a small net loss of $1.1 million.

“The month of April marked the low point with proposal activity more than 40 per cent below [the prior quarter’s] average,” the CEO told an investor call discussing the results, although he added that the company had seen encouraging signs of stronger proposal activity in the past couple of months.

Semi strength
In terms of sector sales, Coherent benefited from continued strength in semiconductor manufacturing and other microelectronics applications, which collectively accounted for $142 million in sales - nearly half the quarterly total.

“With consumer spending and habits worldwide being impacted by [Covid-19], we would expect to see a somewhat quicker recovery for mobile electronics compared to big ticket items, such as, for example, cars,” Mattes observed.

For Coherent, that is likely to manifest in a faster recovery across microelectronics applications than for materials processing.

Mattes explained that the good news regarding 5G phones is that they need more space allocated for the antenna, as well as more power. Both of those aspects are addressed with Coherent’s lasers, said the CEO, through processes used to optimize the OLED screen, and via hole drilling of chips in the phones.

“The more 5G, the more tailwind for the usage of our technology,” Mattes summed up. “As you see 5G ramping, and as 5G readiness goes from the high end of the smart phones into the mid-range, that will be good for us, and that should continue all through the next year.”

Coherent also specializes in huge - and expensive - excimer laser systems used by display manufacturers to produce OLED screens. However, in the latest quarter the company was unable to book any new orders for such equipment.

CFO Kevin Palatnik told investors that this was a direct impact of the coronavirus pandemic, and the inability to “sit side-by-side” with customers. Those discussions are now taking place virtually, but are complicated somewhat by the language barrier with key players in Korea and China.

Despite that, Coherent’s executive team does expect to see orders for its big-ticket equipment return in the next few quarters as the next generation of OLED technology begins a ramp to production.

‘Depressed’ materials processing market
In contrast, Mattes and his colleagues described demand for machine tools as remaining “depressed” - especially across Europe, and to a lesser extent the US - with bookings down a quarter on pre-pandemic levels.

Much as rivals Trumpf and IPG Photonics have noted recently, that trend was already apparent across the German automotive sector prior to Covid-19, but has since been exacerbated by the impact of the pandemic.

Having exited the more price-competitive elements of the laser materials processing market, Coherent is looking to be much more focused and strategic in terms of the applications it is targeting in this area - for example welding of highly reflective metals that are more difficult to laser-process than steel (see image above).

That is crucial for producing electric vehicle batteries, although Mattes warned that it would take time for this market to become a major one for laser companies.

“Once you see the big automotive companies shifting more of their production into electric vehicles, you’ll see that market ramping,” he told investors. “But you’re talking years here - this is not something that’s going to swing the pendulum overnight. [However] we’re at the forefront of it.”

Turning to the scientific market, historically an important one for Coherent but which accounted for sales of only $21 million in the latest quarter, Mattes said that with many research scientists returning to their laboratories, the proposal pipeline for sales of ultrafast laser research and ground-based astronomy was now starting to look more robust.

Digital marketing move
With most sales and marketing activity now taking place on a virtual basis, Coherent has also made a move to adapt to the “new normal” by hiring an executive with long-standing expertise in e-commerce and digital marketing.

David Gee has joined the company as its first ever “chief marketing officer”, bringing with him two decades of blue-chip experience with the likes of Hewlett-Packard, Yahoo, Sun Microsystems, and IBM.

Asked about the appointment, Mattes said that the traditional ways of selling had changed deeply “overnight”, and admitted that although Coherent has vast expertise in terms of laser technology, he did not consider the company to be at the same level in terms of e-business or digital marketing.

Commenting on the way in which the company has seen things change, the CEO observed:

“Trade shows in our industry were a very important way to generate leads, and how we talk with customers. And I don’t think any trade shows, in the western world, are going to [happen], probably for another year or so.”

• Coherent's executives predicted a slight rise in sales revenues in the current quarter, although they pointed out that this may be impacted if the authorities in California initiate any further "shelter in place" orders that could hinder the firm's domestic operations.

Responding to the financial update and outlook, the company's stock price fell by around 5 per cent in early trading August 5. At just under $140 on the Nasdaq, the stock price is equivalent to a market capitalization of around $3.3 billion.