Andy Mattes says laser giant has been able to maintain manufacturing capacity at around 90% amid the Covid-19 pandemic. 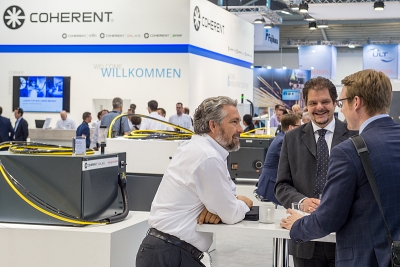 Coherent at the LASER show

Californian laser manufacturer Coherent says that the disruption caused by Covid-19 reduced its sales by around 10 per cent in its latest financial quarter, and that the impact will be of a similar magnitude in the current trading period.

At $293 million, revenues in the three months ending April 4 were down more than 20 per cent on the same period last year, with an impact of between $30 million and $35 million attributed to the effects of the global pandemic - around $10 million more than had been anticipated by the company in early February.

That was partly because Coherent had not foreseen the sudden closure of universities and research laboratories around the world, which meant laboratory staff and researchers were unable to take delivery of the company’s products.

Steering through uncharted waters
New company CEO Andy Mattes, who succeeded the long-serving John Ambroseo just as the pandemic began to sweep across Europe and the Americas, described the unprecedented circumstances of his first two months at the helm.

“Joining a company as a CEO during a time when the world is fighting a pandemic and most of us are under ‘stay in place’ orders is a truly unique experience and uncharted territory,” the former Hewlett Packard executive told an investor conference call.

“Getting my arms around our company in a virtual world has made for long days, but is amazingly productive and effective.”

Mattes described how the company had established a central “nerve center” under the leadership of recently promoted COO Mark Sobey, with a steering committee in place to navigate the myriad challenges presented by the pandemic and the differing responses around the world.

“All executives of the company video-meet multiple times a week to stay on top of the ever-changing situation and safety protocols around the globe, to synchronize our actions and responses, to ensure a stable supply chain and logistics, discuss inventories of critical parts and to meet desired customer delivery dates,” he said.

”For most of April and May we have maintained manufacturing at approximately 85-90 per cent of capacity, while adhering to all social distancing rules.”

That steering committee is now shifting its focus towards bringing Coherent’s employees back to work safely, as well as looking at how best to incorporate remote working into future working practices.

Labs reopening
With some of the key market sectors into which Coherent sells lasers now beginning to recover as economies are reopened tentatively, Mattes reported a strong overall “book-to-bill” ratio. He and his executive team are expecting sales in the current quarter to be at a similar level to that just reported - somewhere between $265 million and $305 million.

Commenting on the scientific sector, the CEO said: “This market segment basically took a ‘time out’ as universities and labs have been largely closed. We expect this segment to recover as the scientific institutions reopen, and pent up demand from unspent research grants begins to flow.”

Observing the wider situation, Mattes added: “Nobody knows how long Covid-19 will impact the global economy, but between our backlog [of orders] and our balance sheet we see Coherent to be in a stable position for quarters to come.”

Nevertheless, the new CEO said that a number of actions were now being explored, with a view to “doubling down” on some key applications, and exiting others - notably fiber lasers, where Mattes’ predecessor Ambroseo had previously warned that Chinese providers would come to dominate the scene in the same way that it had with solar panels, LEDs, and LCDs previously.

“Consistent with this strategy, we will not be participating in the kilowatt fiber market ‘price-race-to-the-bottom’ game,” said Mattes. “Therefore we will complete our move out of the commodity fiber laser market.” He later clarified that Coherent was maintaining its presence in higher-margin fiber laser applications, for example electric vehicle battery welding and directed energy weapons. 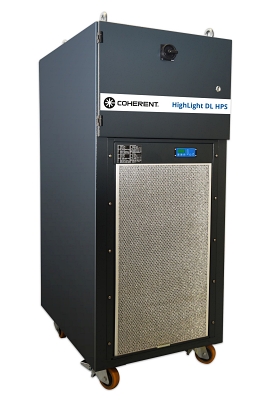 $450 million write-down charge
That exit from commodity fiber lasers is partly responsible for a huge financial write-down relating to the company’s industrial laser business. Coherent’s CFO Kevin Palatnik said that the $450 million impairment charge - which dragged the firm to a net loss of $419 milion in the latest quarter - related to the revaluation of “a tools business, a fiber business, diode and fiber components”.

In contrast, Mattes wants Coherent to double down on the market for lasers used in organic LED (OLED) manufacturing, where the company has established a strong competitive position over several years.

Mattes said he intended to use that “pole position” to enable the advance of new display technologies including micro-LEDs, which are expected to rely on several laser processing steps.

With those changes afoot, the new CEO added that Coherent’s organizational setup would be simplified - highlighting its large number of locations, and the way that it has traditionally reported its financial reports.

“As you can see we have quite some ‘summer homework’ ahead of us,” Mattes concluded.

• Following the latest results announcement, Coherent’s stock price dropped in value by around 6 per cent in pre-market trading on the Nasdaq exchange.

However, like many companies in the photonics sector, the stock has recovered from the widespread crash in prices seen in mid-March as the global spread of Covid-19 became apparent.