US laser firm consolidates fiber laser operations in Europe, and pivots away from cutting applications. 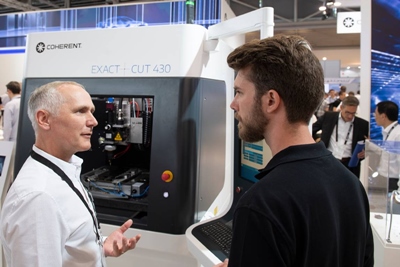 California-headquartered laser giant Coherent has warned that the fiber laser sector is likely to follow the pattern of the solar cell and LED businesses before it - with low-cost Chinese competitors set to grab increasing market share.

Swinging to a net loss of $3.1 million as its quarterly sales revenues dived 30 per cent year-on-year to $339 million, the Santa Clara firm also revealed plans to consolidate its own high-power fiber laser (HPFL) operations.

Communicated internally last month, the move means that production of HPFL at the former Rofin-Sinar site in Hamburg, Germany, will be relocated to Coherent’s facility in Tampere, Finland. That switch will be completed next year, and in conjunction with another site consolidation in Santa Clara should save the company $24 million annually.

Headwinds dominate
CEO John Ambroseo also told investors that Coherent would pivot away from cutting applications with its HPFLs to concentrate on joining and welding, where he said process-related intellectual property is still being created. One example cited is the company's "HighLight FL-ARM" system, which features an adjustable ring mode for zero-gap welding of zinc-coated steel and other metals.

“The June quarter highlighted contrasting outlooks for two major markets,” summed up Ambroseo, the long-time Coherent chief who recently revealed plans to retire by April 2021. “We received the first new order for the phase two build-out of OLED production capacity. This is a welcome development given our competitive positioning in a cycle that could extend as far as 2023.”

But in contrast, he added, headwinds in laser materials processing have gathered strength - a combination of weakening macro demand, continued pressure from tariffs, and aggressive discounting in China from both domestic and foreign competitors.

That message echoed the remarks by IPG Photonics’ management, made earlier the same day, that pricing pressure in China had become particularly prevalent amid the apparently escalating trade war between China and the US.

Short-termism
With demand for machine tools hit hard by lower spending across both the automotive and construction sectors, Ambroseo added that the US-China tensions were fostering “short-termism” between customers and manufacturers as all parties tried to avoid building up tariff-related inventory.

“Perhaps the upcoming presidential election cycle will lead to some form of resolution,” the CEO added.

Ambroseo appeared to warn of even tougher times to come, telling an investor conference call to discuss Coherent’s latest figures that last month’s LASER World of Photonics trade show in Munich had proved to be “an eye-opener” for the fiber laser market.

“It would appear fiber lasers are following the same trajectory as solar, LEDs, and LCDs in China,” said the CEO. “Future competitiveness relies upon defensible device and process intellectual property, as well as supply chain excellence.”

That analysis was partly based on an encounter with one of Coherent’s own OEM customers in Munich, who offered to provide 1 kilowatt fiber laser modules for $7500, reducing to just $5000 over two years.

“While these numbers might sound unreal, we would point out that they roughly correlate with end-user pricing and margins for the largest Chinese fiber laser manufacturer,” Ambroseo added.

Genie out of the bottle
Asked about how the fiber laser sector is likely to play out in the longer term, he predicted that the different strategies employed by Western and Chinese competitors would see market share move towards the latter.

“I don't think that the genie is going back into the bottle here,” he remarked. “Most of the Western manufacturers are profit-and-loss driven, and we're trying to run good healthy businesses. A lot of the Chinese manufacturers are focused on growth, and they do receive subsidies from the government to help bridge the gap.”

“We and everyone else in the OLED universe are tracking more than 20 new fabs planned between now and 2023, with emphasis on flexible OLED,” he said. “This will drive incremental investment in laser lift-off (LLO), where we continue to hold substantial market share.”

The CEO thinks that the recent order received for one of Coherent's large UV laser systems could mark the beginning of the next major build-out phase in OLED displays.

But with revenues from that phase still some way off, Ambroseo and his executive team are expecting continued softness in the near term. For the September quarter just under way, they predict sales in the $320 million to $340 million range. The total for the equivalent quarter last year was $462 million.

• Coherent's stock price dropped in value by nearly 7 per cent following the company's quarterly update. After closing July 31 at just under $139 on the Nasdaq, Coherent's market capitalization stood at $3.4 billion.