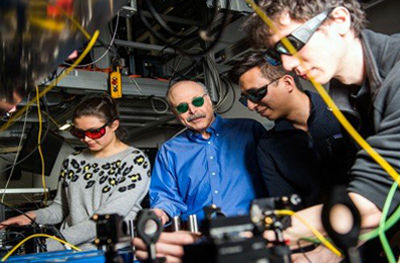 David Awschalom, physicist at U Chicago with graduate students in his lab.

The U.S. Department of Energy (DOE) has presented a report outlining a strategy for the development of a national quantum internet, with the aim of “bringing the United States to the forefront of the global quantum race and ushering in a new era of communications.”

This report provides a pathway to ensure the development of the National Quantum Initiative Act, which was signed into law by President Trump in December of 2018.

At last week's launch at the University of Chicago, the DOE stated, “Around the world, consensus is building that a system to communicate using quantum mechanics represents one of the most important technological frontiers of the 21st century. Scientists now believe that the construction of a prototype will be within reach over the next decade.”