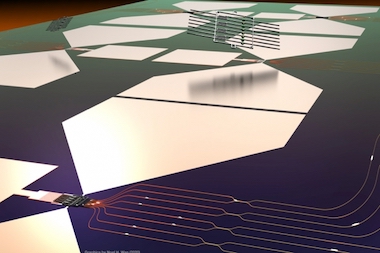 A project at MIT has developed a process to integrate atomic-scale defects located in thin slices of diamond, so called "artificial atoms," into photonic circuitry on a larger scale than previously achieved.

The breakthrough, described as a turning point in the field of scalable quantum processors, could point towards ways to assemble multiplexed quantum chips for use in general purpose processors. The findings were published in Nature.

Quantum computers operate using quantum bits, or qubits, which are capable of representing 0, 1, or both at the same time, potentially allowing these computers to perform multiple calculations simultaneously in a way that classical processors cannot match.

"A central challenge in developing quantum computers and long-range quantum networks is the distribution of entanglement across many individually controllable qubits," noted the MIT project in its published paper.

Color centers in diamond - defects in diamond's carbon lattice where adjacent carbon atoms are missing - are known to be effective as solid-state artificial-atom qubits, enabling on-demand remote entanglement and coherent control of other associated qubits with minute-long coherence times.

"In the past 20 years of quantum engineering, it has been the ultimate vision to manufacture such artificial qubit systems at volumes comparable to integrated electronics," said Dick Englund of MIT. "Although there has been remarkable progress in this very active area of research, fabrication and materials complications have thus far yielded just two to three emitters per photonic system."

In the MIT chiplets, the defects in the diamond lattice structure were replaced with germanium and silicon, with each center functioning as an atom-like emitter whose spin states can form a qubit. The quantum information represented by each qubit is then carried by photons of light that it emits.

"The bottleneck with this platform is actually building a system and device architecture that can scale to thousands and millions of qubits," commented MIT's Noel Wan. "Unwanted contamination can affect important quantum properties such as coherence times, and variations within the crystal can cause the qubits to be different from one another, and that makes it difficult to scale these systems."

Manufacturing sub-components separately in this way allows the yield of the overall manufacturing operation to be maximized, according to the project, while use of a single-crystal aluminium nitride layer rather than silicon as the circuit platform exploits AlN's low autofluorescence and loss in the visible spectrum.

"We use semiconductor fabrication techniques to make these small chiplets of diamond, from which we select only the highest quality qubit modules," said Wan. "Then we integrate those chiplets piece-by-piece into another chip that 'wires' the chiplets together into a larger device."

Using the hybrid method, MIT constructed a 128-channel, defect-free array of germanium-vacancy and silicon-vacancy colour centres in an aluminium nitride platform, said to be the largest integrated artificial-atom photonics chip to date.

A modular hybrid technique should also allow the use of diamond color centers in other semiconductor crystals, such as like silicon carbide, certain semiconductor quantum dots, or rare-earth ions in crystals, potentially enabling the properties of the final photonic circuit to be tuned for different purposes. Future work will include automating the process and demonstrating further integration with optoelectronic components such as modulators and detectors.

"This is a proof of concept that solid-state qubit emitters are very scalable quantum technologies," commented Wan. "In order to process quantum information, the next step would be to control these large numbers of qubits and also induce interactions between them."