Four young UK companies developing optics-based products are tipped for success by the Institute of Physics. 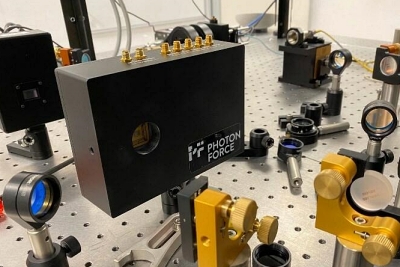 The UK’s Institute of Physics (IOP) has named four small companies developing photonics products for emerging applications among the winners of its latest “Business Start-up” awards.

They included ORCA Computing and Oxford HighQ, both spin-outs from the University of Oxford, alongside Edinburgh’s Photon Force, and the University of Bristol affiliated QLM (Quantum Light Metrology) Technologies.

Entangled state storage
According to the firm’s own citation, quantum optics experts at ORCA have established a completely new approach to quantum computing with their optical memory device.

Co-founded by Professor Ian Walmsley, director of the UK’s quantum computing “hub” at the University of Oxford, ORCA says that its approach allows single photons and multiple entangled photon states to be stored and retrieved on demand within rubidium gas.

Meanwhile Oxford HighQ has devised an optical microcavity analysis (OMCA) technique for sensing nanoparticles and chemicals. The company says that the first application of its devices enables real-time precision measurement of the quantity of pharmaceuticals loaded into drug delivery nanoparticles.

The micrometer-sized devices are said to provide a “step change” in sensitivity, capable of detecting just a handful of molecules. “Optical microcavity sensors for use with liquid samples will meet increasing demand for new tools in pharmaceutical and medical research, food and water monitoring, and security and defense,” predicts the firm.

Single-photon solutions
Active since 2016 and a spin-out from the University of Edinburgh, Photon Force has developed an ultrafast camera that is sensitive to individual photons. Its “PF32” product has been used in numerous applications.

As well as scaling up production, the company - an exhibitor at this year's Photonics West event - says it is now working on an architecture offering a 15-fold improvement in sensitivity and an order-of-magnitude reduction in noise.

Exploiting technology developed within the UK’s quantum imaging hub, Bristol-based QLM is also working on a single-photon technique as a low-cost way to identify gas leaks and monitor methane emissions.

QLM says it is actively engaged with the UK’s National Physical Laboratory’s emissions metrology group, as well as a number of gas companies, with a view to producing gas leak “security cameras” that are capable of monitoring carbon dioxide, ethylene, and carbon monoxide gas, as well as methane.