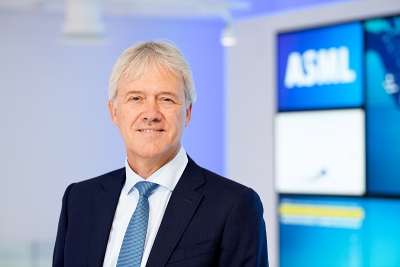 ASML has substantially reduced its sales expectations for the first quarter of this year, but says that any shortfall will be recouped in the coming months, with no sign yet of reduced demand resulting from the global coronavirus crisis.

The Dutch semiconductor equipment firm, which has a de facto monopoly on the latest extreme ultraviolet (EUV) lithography systems needed to make state-of-the-art logic and memory chips, said in January that sales in the quarter ending March 31 would be between €3.1 billion and €3.3 billion.

But just ahead of the quarter ending, CEO Peter Wennink announced that the figure would instead be in the region of €2.4-2.5 billion, a drop equivalent to around three-quarters of a billion euros.

Supply chain issues ‘solved’
While that sounds serious, Wennink stressed that the combination of issues that has prompted the change to financial guidance was already partly resolved, and that revenues not recognized in the first quarter would simply shift to later in the year.

“Until now the Covid-19 outbreak has had limited impact on ASML’s manufacturing capability,” said the CEO. “Also, from a customer point of view, we have not seen a reduction in the demand for our systems this year.”

Three key effects are behind the Q1 shortfall, he explained. The first of those relates to delayed shipments of more conventional deep-UV (DUV) lithography equipment to Wuhan, the initial epicenter of the novel coronavirus outbreak, and where shipment and travel restrictions have already been in place for months.

“Second, we have experienced some issues in our supply chain, which for now have been solved,” added Wennink. “Combined with longer than initially planned cycle times for the first NXE:3400C [EUV] models in final configuration, this has resulted in some delays in shipments.”

Expedited shipments
The third effect to impact sales relates to decisions made by customers worried about whether the ability to ship systems in the current circumstances might change. Some of ASML’s customers have requested expedited delivery of those EUV systems before normal factory acceptance tests are completed.

However, this means that final acceptance of the equipment - and therefore revenue recognition - can only take place after the EUV kit is successfully installed at the customer’s fabrication facility. Each of the EUV systems relies heavily on high-power lasers and state-of-the-art optical components to generate and control the EUV light source.

“Despite the challenging circumstances, we have been able to continue ASML’s operations although we, like many of our peers and customers, are dependent on future developments with respect to measures taken to control the Covid-19 outbreak around the world,” added the CEO.

Last week Bloomberg reported that operations were continuing largely unaffected at ASML’s huge site in Veldhoven, partly because the ultra-clean environment at much of the facility provided such effective protection from any pathogenic contaminants, including viruses.

And because ASML is the only equipment firm to have developed production-level EUV systems, chip manufacturers have nowhere else to turn as they equip their latest fabs to scale production of new devices that rely on EUV patterning.

Samsung ramps EUV-based DRAM
One example is Samsung, which said last week that customer evaluation of its latest memory (DRAM) chips was complete, with a production ramp now pencilled in for next year.

“The new EUV-based DRAM modules have completed global customer evaluations, and will open the door to more cutting-edge EUV process nodes for use in premium PC, mobile, enterprise server and datacenter applications,” announced the Korean technology giant, the first chip maker to adopt EUV for DRAM. Until now, EUV has been largely restricted to production of logic chips.

“EUV will be fully deployed in Samsung’s future generations of DRAM, starting with its fourth-generation 10 nm-class (D1a) or the highly-advanced 14nm-class, DRAM,” added Samsung. 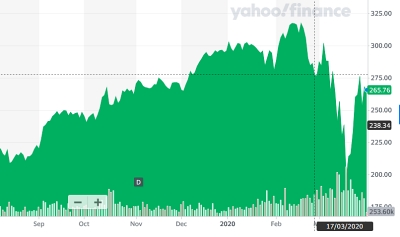 Meanwhile ASML’s Wennink emphasized that the company’s priority was to ensure the safety of its workforce and their families. “Our second goal is to ensure the continuity of our business and our customers’, suppliers’ and partners’ businesses, so that we can all continue to serve our end markets,” the CEO added.

ASML’s executive team is set to provide a further update later this month, when the company’s Q1 2020 earnings report is filed.

• While ASML’s stock price has been hit like most others since the coronavirus outbreak became a global pandemic, it has already recovered strongly.