Semiconductor fab spending to roar back in 2021 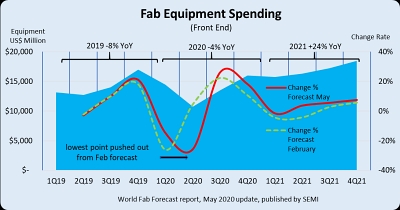 Spending on equipment needed to make semiconductor devices - a key market for optics and photonics companies - is expected to surge to record levels in 2021.

According to the latest “world fab forecast” from the Semiconductor Equipment and Materials International (SEMI) industry group, the Covid-19 pandemic has pushed out the anticipated low point of spending by around one calendar quarter this year.

The result is that fab equipment spending is now expected to fall by around 4 per cent this year, on the back of an 8 per cent decline measured in 2019.

And while threats from the current pandemic remain, SEMI’s forecasters are predicting a 24 per cent upswing in 2021, as the market swells to a record-breaking $67.7 billion. That figure is around $2 billion higher than SEMI had predicted earlier this year.

Spending on fabs for manufacturing image sensors is expected to be one of the major growth areas, with a 60 per cent surge this year followed by a further 36 per cent increase in 2021.

Safety stocks
Commenting on the trends observed since the outbreak of the novel coronavirus, SEMI stated: “In March, some companies appeared to build up safety stock as a countermeasure to the spreading virus as shelter-in-place orders emptied offices, malls, and schools worldwide.

“As the contagion grew, demand for IT and electronic products such as notebooks, game consoles, and healthcare applications surged. Some stockpiling is expected to stretch into the second quarter, fueled by fear of restrictions - scheduled to take effect in late June - on semiconductor equipment sold to China.”

The 2021 surge will be fueled largely by renewed investment in production of 3D NAND memory chips, following the steep decline in that market over the past couple of years.

“Memory fabs will lead worldwide semiconductor segments with $30 billion in equipment spending,” SEMI predicts, adding that the logic sector - where recent spending has been concentrated - will remain strong, with almost exactly the same level of investment.

However, the SEMI team points out that threats from the coronavirus pandemic still lurk, with related layoffs meaning that more than 40 million workers remain idled in the US alone, according to figures for the month of May.

Digital transformation
But overall, those negative effects are expected to be countered by the degree of digital transformation required to communicate effectively, driving industry growth through cloud services, server storage, gaming, and health applications - all of which will spur demand for memory and IT-related chips.

Beneficiaries are likely to include the lithography system builder ASML and its army of component suppliers. Earlier this year key customer Samsung said it would be ramping production of its latest DRAM memory chips in 2021.

Those devices rely on a new manufacturing process involving extreme ultraviolet (EUV) lithography patterning, a technique pioneered by ASML that in turn relies on a variety of lasers and specialist optical components.