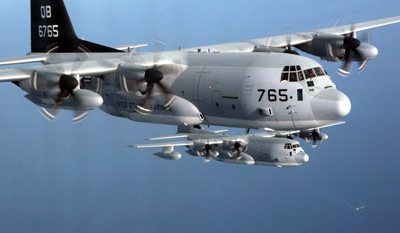 KC-130J aircraft to be fitted with BAE's Infrared Countermeasures system.

The Lockheed Martin KC-130 is an extended-range tanker version of the C-130 Hercules transport aircraft modified for aerial refueling. The KC-130J is the latest variant operated by the United States Marine Corps, with 48 delivered so far out of 79 ordered.

“We understand how vital the KC-130J is to the U.S. Navy and U.S. Marine Corps and the enhanced capability the DoN LAIRCM system brings to the fight,” commented Pete Trainer, vice president and general manager of BAE Systems’ Air Force Solutions.

19 aircraft to be protected

This is the second such contract awarded to BAE under the Prototyping and Limited Production indefinite delivery indefinite quantity contract. The DoN LAIRCM installation will be performed on up to 19 KC-130J aircraft over the next five years; the work will take place in Crestview, Florida in partnership with Vertex Aerospace Aircraft Integration & Sustainment Division.

Captain Steven Nassau, program manager for Naval Air Systems Command’s PMA-207, commented, “This competitive award will allow the Marine Corps to move from government depot installation to industry without a gap in services. It is a great reflection on the dedication of the KC-130J Mission Systems Team and the contracts office. It also speaks to the flexibility of both the Navy and industry.”