UK laser manufacturer has also appointed a new CEO, and says it will increase its workforce ‘significantly’. 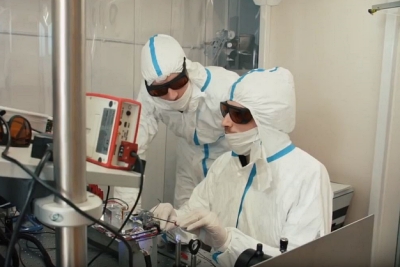 Precision laser manufacturer UniKLasers has completed a new financing round worth £750,000, and is planning to expand its manufacturing and research and development efforts as a result.

The Edinburgh, UK, firm, set up by founder Fedor Karpushko in 2013, specializes in narrow-linewidth solid-state sources that are used in applications including holography and a range of emerging quantum technologies.

The latest funding - led by Par Equity with support from The Scottish Investment Bank - means that UniKLasers has now raised £2.3 million since 2017.

“UniKLasers will use this funding round to expand and upgrade its manufacturing and research and development capability, continue to build its global sales and marketing pipeline and significantly increase its workforce to further capitalize on a market directly relevant to their application, estimated to be worth $1.46 billion,” announced the laser firm.

New CEO
That expansion drive will be overseen by new CEO Alan Faichney, who has taken over the lead executive role from Karpushko. Faichney has prior experience in the photonics industry thanks to a period at spectrometer firm Edinburgh Instruments, overseeing its 2013 sale to Hong Kong-based Techcomp Holdings.

While UniKLaser’s narrow-linewidth sources have a number of applications across research and industry, in recent years the company has become closely involved with the UK’s well-funded efforts to develop commercial quantum technologies including high-precision clocks and gravimeters.

For example, UniKLasers is part of a 12-strong “Gravity Pioneer” consortium led by the engineering services company RSK. The aim is to build and test a new gravity-sensing instrument, based around laser-cooled atoms, that is able to detect buried hazards much more effectively than current technologies.

For that, UniKLasers has provided an extremely compact and high-stability, single-frequency source operating at just over 780 nm, which is tailored to an absorption line found in rubidium atoms.

Company COO Anastasia Bombrys, who believes that the latest investment offers the company a great opportunity amid the global disruption caused by the Covid-19 pandemic, pointed out the significant timing of the deal.

“This month is a very important milestone in laser history,” Bombrys said. “It marks the 60th anniversary [of] the invention of the world’s first laser by American physicist Theodore Maiman. The intervening period has seen lasers become crucial to manufacturing, engineering and academic research across the world.”

Narrow linewidths
Karpushko, who has become CTO following Faichney’s appointment, invented his first laser just six years after Maiman's breakthrough, and has continued to innovate since then. Critical to the UniKLasers sources is a proprietary technology platform known as “Bragg Range Michelson Mode Selection” (BRaMMS).

BRaMMS is used to achieve the extremely narrow laser linewidths that are typically required for matching the similarly narrow absorption lines of ultra-cold atoms critical to the operation of quantum clocks and gravimeters.

The patented technique is described by UniKLasers as a variation of tilt locking, to ensure the single-frequency output and compensate for any spectral drift.

“There is a very faint transverse mode in the laser cavity, in addition to the dominant TM00 mode,” explains the firm in a poster presentation. “By overlapping these on a split detector it is possible to detect changes in frequency due to the different phase behavior of the two modes.”

Commenting on the investment, Par Equity’s sponsoring partner Paul Atkinson pointed out that the finance firm had first invested in UniKLasers in 2017. “We are delighted to continue supporting the company as one of the very best high-growth technology startups,” he added.

“UniKLasers has developed a suite of market-leading lasers from a single platform and continues to be heavily involved with pioneering quantum technologies.”