Directed energy weapons are ideal for the military but more development and investment is needed, says Trey Obering in a defense plenary in Orlando. 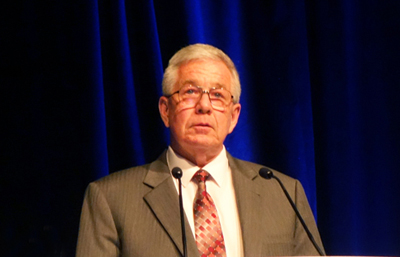 As with the other defense plenary speakers on Monday evening, Morley Stone and Jay Johnson, this photonics technology authority, who also has significant business, research and military experience, Obering voiced his trenchant opinions of what is required to ensure the US military “prevails” in terms of innovation – and funding (especially the latter).

To start, Obering outlined a range of threatening military scenarios, which have actually occurred in recent years: US warships threatened by swarming boats in the seas off Iran and Somalia; the challenges currently facing US and allied forces in the Middle East and the persistent threat of artillery trained on Seoul from over the border in North Korea.

”What these scenarios have in common is that they could all be restrained by the application of directed energy weapons [DEWs] to reduce the risk of escalation of these threats,” he explained. But the development and deployment of high energy laser-based weapons, which have actually been under development for at least 30 years, is not merely theoretical or for a show of strength.

Obering continued, “The use of directed and relatively cheap weapons is also attractive on the tactical side of the spectrum. At a DEW summit of US military, government, and industry leaders, which my company Booz Allen Hamilton hosted last year, US Air Force special operations commander Lt General Brad Webb described in detail the potential use of a HEL [high energy laser] DEW on board an AC 130 Lockheed Martin gunship on a covert mission to capture a high-value terrorist mastermind in a hostile territory.

“In that scenario the laser weapon was used to destroy electrical transformers, pick-up trucks and UAVs with deadly silence and undetectability. So in a flash, the enemy’s communications, ISR (Intelligence, surveillance, and reconnaissance) and escape capabilities were all destroyed.

“Another scenario is countering the Iranian swarming boat attacks that can occur in the Straits of Hormuz. But HEL DEWs could also be used to stop those boats in a non-lethal manner.” 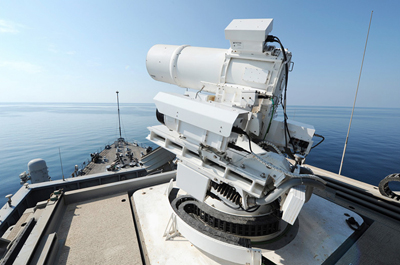 According to Obering, there are now a number of instances where directed energy weapons are moving from the research and demonstration phase to become operational product types and in some quantity. He said, “The US Navy has now defined a range of laser systems for certain ships following the successful 2014 three-year deployment of a 30 kW operational prototype HEL DEW on the USS Ponce.

"That weapon was used nearly 24-7 during its three-year test deployment and many valuable insights were achieved and reported back to the government and military community,” he added. “The new family of DEW systems will include high-power lasers exceeding 100 kW outputs as well as reduced power lasers for other applications.”

Obering detailed other recent military trials of DEWs such as a laser weapon integrated on a Stryker military vehicle in Europe. “The Second Stryker Cavalry Regiment supported by the Seventh Army Training Command has also conducted a live fire engagement of a 5 kilowatt mobile expeditionary system in the Army’s Oklahoma Fort Sill test facility.”

The US Air Force Chief of Staff recently signed a DEW development plan to develop and deploy both HELS and DEWs for aircraft. This plan includes the USAF HEL Demonstration Shield Program, which aims to test HEL on aircraft by 2021 against both surface-to-air and air-to-air missiles.

In addition the US Air Force has partnered with the US Navy in the development of a high power RF weapon in a project called High-power Joint Electromagnetic Non-Kinetic Strikers – HI-JENKS, intended to be able to disable optronics, communications and computer networks.

Obering also described what he called “the most ambitious program” in the Department of Defense, being led by his former employer, the Missile Defense Agency. “They are developing a very high power laser, capable of being carried on a high-flying UAV, intended to target missiles during their boost phase,” he said

”This laser would deliver more than 500 kW and have a range of hundreds of miles. The first step in this endeavor will be a competition to develop a low power demonstration laser to explore beam control and tracking at altitude.”

Development needs and barriers to progress

Obering went on to explain that there is still much work to be done in DEW development and suggested that delegates to the conference and their companies could have some of the necessary solutions. ”As the DoD works to develop and incorporate these technologies, much of the work should be collaborative as improvements in materials, power generation, and thermal control, to reduce the size, weight and power required to update the these capabilities,” he said.

"Barriers to progress include technical, political and policy issues, including public resisistance towards this often misunderstood technology. As with any weapons development some groups are opposed to investment in directed energy as a matter of ideology. There are also those that think that directed energy weapons threaten the continued use of kinetic weapons but DEWs should not be viewed as a replacement because each type has different capabilities, which I believe are in fact complimentary.”

But the most significant barrier to directed energy weapons development today is funding, he said. “In the days of the Airborne Laser project, we were funding rich and technology poor, but today it is the other way round. Funding has to be increased to at least $2 billion to $3 billion per year, which I believe is a reasonable goal considering that the US Department of Defense has already increased from $500 million to at least $1 billion the investment in DEWs over the past two years. Added to which, the political outlook is optimistic as support for directed energy weapons is strong and bipartisan on the Hill and in the Senate.”

He concluded, “DEW deployment is an inevitability; the question is not 'if' it will be, but whether it will be for us or for our adversaries. We are perpetually in an arms race; we are fighting tomorrow’s wars today in our labs and on the testing sites. Whether we can continue to prevail in the future will be directly determined by our present-day investments and decisions. Investment in DEWs will play a large role in our ability to maintain military superiority for the future.”