BAE Systems-developed plane, which runs on GaAs solar cells and Li-ion batteries, could stay airborne for a year. 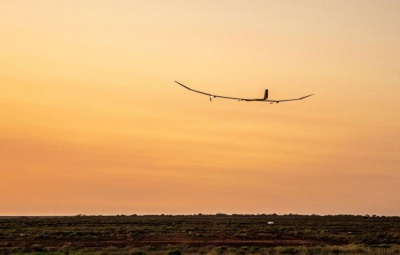 PHASA-35, a 35m wingspan solar-electric aircraft, has successfully completed its maiden flight. Developer BAE Systems says that the “landmark” flight paves the way to this new aircraft becoming a game-changer in the air and space market, “plugging the gap between aircraft and satellite technology.”

A video of the recent flight in Australia can be viewed here.

PHASA-35 has been designed, built and flown in less than two years as part of a collaboration between BAE Systems and UK-based now subsidiary company Prismatic, which was acquired by BAE Systems in 2019.

Designed to operate unmanned in the stratosphere, above the weather and conventional air traffic, PHASA-35 is said to offer "a persistent and affordable alternative to satellites combined with the flexibility of an aircraft, which could be used for a range of valuable applications including forest fire detection and maritime surveillance".

The PHASA-35, which weighs around 150 kg, is powered by the sun during the day and by batteries overnight. Its combination of long-life lithium-ion batteries and gallium arsenide solar array over the wings, mean that the aircraft could be operated in the stratosphere. In addition, direct-drive electric motors with high-altitude propellers enable it to fly above 21,000m (70,000ft) and at up to 145 kmh (78 knots) – for up to a year continuously.

The solar cells – which are gallium arsenide triple-junction, high-efficiency devices – are supplied by Microlink Devices of Niles, Illinois, just outside of Chicago.

They are the culmination of efforts from a collaborative team of British experts from Prismatic in Hampshire - where two full-sized concept aircraft were built last year - working alongside our engineers in Lancashire, where the aircraft underwent further integration testing prior to flight trials.

As a High Altitude Long Endurance (HALE) vehicle, PHASA-35 is powered by the Sun during the day and by batteries overnight. The long-life battery and highly efficient solar technology could allow the aircraft to maintain flight for up to a year operating in the stratosphere, the upper regions of the Earth’s atmosphere. PHASA-35 is designed to provide a persistent, stable platform for monitoring, surveillance, communications and security applications. 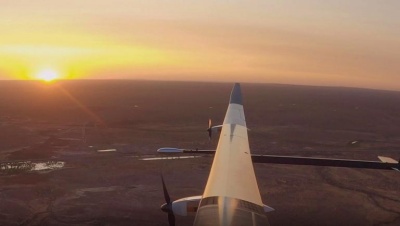 Sunny side up: Flying over the RAAF Woomera Test Range in South Australia.

When connected to other technologies and assets, it will provide both military and commercial customers with capabilities that are not currently available from existing air and space platforms.

The Unmanned Air Vehicle also has the potential to be used in the delivery of communications networks including 5G, as well as provide other services, such as disaster relief and border protection, at a fraction of the cost of satellites.

Ian Muldowney, Engineering Director at BAE Systems, commented, “This is an outstanding early result that demonstrates the pace that can be achieved when we bring the best of British capability together. To go from design to flight in less than two years shows that we can rise to the challenge the UK Government has set industry to deliver a Future Combat Air System within the next decade.”

Our acquisition of Prismatic forms part of the Company’s strategy to develop breakthrough technologies, making bolt-on acquisitions where they complement existing capabilities and provide an opportunity to accelerate technology development in key areas. Further flight trials are scheduled for later in 2020, with the possibility that the aircraft could enter initial operations with customers within 12 months of the flight trials program completion.