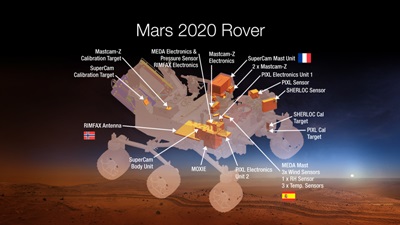 The technical team from Los Alamos National Laboratory (LANL) that built the “ChemCam” analyzer for the Mars Curiosity Rover is to develop an improved version of the tool for a new Mars mission set for 2020.

Principal investigator Roger Wiens and his colleagues will work on “SuperCam” for NASA’s Mars 2020 Rover. Like ChemCam, it will be able to perform remote elemental analysis of rocks and other samples remotely using laser-induced breakdown spectroscopy (LIBS).

But in addition to that, SuperCam is set to feature Raman and time-resolved fluorescence capability, meaning that it will be able to identify molecules as well as atoms. That extra capability should enable geologists to determine the nature of minerals and organic material on the red planet.

NASA has selected seven instruments in all for its 2020 rover, and is set to spend $130 million on their development.

Aside from SuperCam, they include “Mastcam-Z”, described as an advanced camera system with panoramic and stereoscopic imaging capability with the ability to zoom. The instrument also will investigate the mineralogy of the Martian surface and assist with general rover operations. Its principal investigator is James Bell from Arizona State University in Tempe.

The rover will also feature “SHERLOC”, the first ultraviolet laser Raman spectrometer to make the journey to Mars. Short for “Scanning Habitable Environments with Raman & Luminescence for Organics and Chemicals”, it will provide fine-scale imaging, using the UV laser to provide fine-scale mineralogy and to detect organic compounds. Its principal investigator is Luther Beegle from NASA’s Jet Propulsion Laboratory in Pasadena.

Oxygen converter technology demo
Among the other analytical instruments selected are an X-ray fluorescence spectrometer, and a set of sensors to measure of temperature, wind speed and direction, pressure, relative humidity and the size and shape of Martian dust size.

Ground-penetrating radar kit will provide centimeter-scale resolution of the geologic structure of the subsurface, while the Mars Oxygen ISRU Experiment (MOXIE) will attempt to produce oxygen from the carbon dioxide that makes up the vast majority of the Martian atmosphere.

“We are extremely excited to be going to Mars again,” said LANL’s Wiens. “More importantly for the mission, I know SuperCam is the very best remote sensor that NASA can have aboard.”

LANL says that despite its added functionality, the new instrument will be around the same size and weight as the original ChemCam.

As well as the LIBS, Raman and fluorescence techniques, it will add color to its high-resolution visible imaging capability. “The updates make SuperCam the perfect instrument to provide fine-scale mineralogy, chemistry, organic detection, and color images, with the added bonus of being able to dust off a surface via laser blasts,” stated the lab, whose engineers will also build the detector electronics for the SHERLOC instrument.

Tony Nelson from LANL’s Space Electronics and Signal Processing Group will lead the efforts in constructing the SHERLOC electronics, while laser scientists Sam Clegg and Wiens are part of the team.

SuperCam represents a continuation of the effort between LANL and the researchers at the French Space Agency (CNES) in Toulouse – which in turn worked closely with Thales Optronics on the solid-state laser that provides the LIBS pulses for ChemCam. Additional collaboration for the new kit comes from the University of Hawaii and the University of Valladolid in Spain. 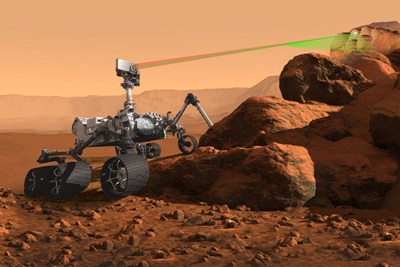 Humans living on Mars?
NASA said that it received no fewer than 58 proposals for the 2020 rover kit - twice the usual number submitted for instrument competitions recently.

Based on what is regarded as the highly successful Curiosity rover, which has now been investigating the Martian surface for nearly two years, the 2020 rover is intended to search for signs of ancient Martian life directly, and also determine the potential human habitability of the environment.

“An ability to live off the Martian land would transform future exploration of the planet,” NASA announced. “Designers of future human expeditions can use this mission to understand the hazards posed by Martian dust and demonstrate technology to process carbon dioxide from the atmosphere to produce oxygen. These experiments will help engineers learn how to use Martian resources to produce oxygen for human respiration and potentially oxidizer for rocket fuel.”

NASA’s James Reuther, deputy associate administrator for programs for the Space Technology Mission Directorate, said: "This technology demonstration will pave the way for more affordable human missions to Mars where oxygen is needed for life support and rocket propulsion."