ChemCam: under the hood 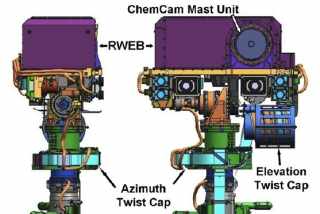 Having survived its trip to Mars and a final hair-raising landing sequence, the Curiosity rover is now hitting its stride and starting to carry out the scientific research that will occupy it for the next two years.

That program includes use of ChemCam, the mast-mounted instrument comprising a laser-initiated breakdown spectroscopy (LIBS) platform and a high-resolution imager used to visualize the targets. ChemCam represents the first implementation of LIBS in a planetary science application, and has already used its laser to study some selected Martian rocks around the vehicle.

Although the principles of LIBS are straightforward, the development of a practical instrument able to apply the technique in the very specialized environment of the Curiosity rover proved to be challenging.

Optics.org spoke to the suppliers of three of ChemCam's key operational components, to hear about their initial contact a decade ago with co-developers Los Alamos National Laboratory and the French space research institute CNES, and about the novel technology that resulted.

A smaller, lighter laser
"We were first approached by the French national space agency in 2001," said program manager Eric Durand of Thales Optronics. "CNES indicated to us that a Thales product, the Diva diode-laser platform, was exactly what was needed to do LIBS on Mars, since its optical performance closely matched what was required. But CNES was looking for some modifications to be made."

Those adjustments were not trivial. The normal Diva platform was designed to operate at ambient temperatures, while the Curiosity blueprint needed a source able to operate across a 60 degree temperature range without active cooling. The weight requirements were even more severe: "The original product weighed about 10 kg," said Durand. "CNES asked us if we could develop a version that weighed only 500 g. And one which could, of course, also withstand the journey to Mars." 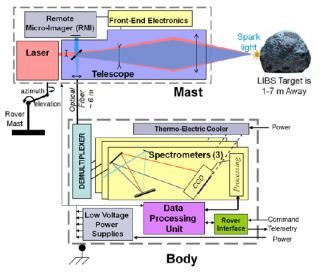 The approach taken was to strip away all temperature-regulating components to reduce volume and mass, and to design a system employing an oscillator followed by two slab amplifiers. This in turn required the replacement of the existing oscillator with a system more conducive to conduction cooling.

"We changed the laser medium from Nd:YAG to a rod of Nd:KGW, or neodymium-doped potassium-gadolinium tungstate, which was longitudinally pumped by a 700 W diode stack," Durand explained. "The wide spectral acceptance of the Nd:KGW rod provides very small absorption variations over broad temperature ranges. This change allows both the diode and the rod to be conductively cooled, and to run under the large temperature ranges expected on Mars."

The team also modified the platform's existing Q-switch system, having deemed its 4 kV power requirement impractical for use on another planet. Instead, an alternative Q-switch based around a RTP (rubidium titanyl phosphate) Pockels cell was employed, an arrangement that has since been more widely investigated for use in Earth-bound scenarios where low voltage is a constraint. In the case of ChemCam, the revised Q-switch needed only 1 kV to operate over the required temperature range.

By 2003, when ChemCam was officially approved for the Curiosity rover, Thales had an optical configuration that worked very well in the laboratory. The next four years were spent constructing six different models to study the parameters of the system, prior to the delivery of the final flight instruments in 2007.

"In effect, we eventually changed almost everything about the laser," commented Durand. "It was not easy, and at the time I was not fully confident that we could achieve it. But we met the operational requirements: a 1067 nm source delivering energies above 24 mJ in pulses below 8 ns duration, and an optimal operation between -20 and +20 degrees Centigrade."

A trio of spectrometers
The LIBS analysis carried out by Curiosity employs CCDs and spectrometer electronics contained within the ChemCam body unit, located separately from the mast on the rover itself, and which receives the incoming plasma light generated by the laser via an optical cable.

ChemCam incorporates three spectrometers, supplied by Ocean Optics and originally built around a standard component, although significant modification was involved here too.

"The spectrometers were based on the HR2000 product, but these were customized significantly," Rob Morris of Ocean Optics commented. "In particular, changes were made to the optoelectronics in order to make the system more space-worthy. This was necessary since there was really nothing standard about the implementation involved in this project. Our analogy for the difference between using a spectrometer in the lab and preparing one to travel to Mars was the difference between one lap in your swimming pool and swimming the English Channel."

A trio of spectrometers allows ChemCam to analyze three wavelengths bands: ultraviolet (UV) covering 240.1 to 342.2 nm; violet (VIO) 382.1 to 469.3 nm; and visible and near infrared (VNIR) 474.0 to 906.5 nm. Modifications to the spectrometer optical bench were again essential. The flight housings were made of beryllium to save weight, and the three spectrometers were stacked without lids between the units, all in the name of reducing mass.

In the event, and late in the design process, additional thermo-electric cooler units were found to be required and duly installed, to further control the temperature of the spectrometers.

"This project was truly specialized," said Morris. "At least 80 people at Ocean Optics worked on ChemCam alone, which included three or four working almost exclusively on the spectrometer part. That level of resources would be hard to support in most companies." 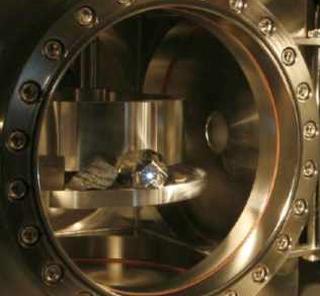 The ChemCam laser being tested

Customized CCDs
ChemCam uses three identical CCD cards, one for each spectrometer, all three of which were supplied by e2v. (The company also supplied a CCD for another of the rover's experiments, the CheMin powder X-ray diffraction instrument.)

The three sensors were based on the company's standard 4210 product, although the surface coatings on each were optimized for their specific spectral ranges. A commercially available enhanced UV coating was used for the CCD scanning the UV wavelengths; an enhanced broadband coating for the VIO sensor; and an entirely customized coating for the VNIR device.

"The third CCD was effectively a new version of 4210 with a graded anti-reflection coating," commented project manager Wolfgang Suske. "This was applied with a different thickness profile over the area of the CCD. In practice this means that the reflections at the different wavelengths depended on the position on the device, and could be tailored for optimum performance over a wavelength range."

This approach is intended to combat the problem of etaloning, in which the response of a CCD detector varies as a function of wavelength because of constructive and destructive interferences within the detector itself. This problem became particularly significant at wavelengths longer than 450 nm; hence the application of a graded coating on the VNIR sensor, intended to match the wavelength for each column of pixels on the detector.

"The modification was done to deliver good performance from effectively a fixed spectrometer," said Suske. "If you have just a single-thickness AR coating over the device, you won't have optimum performance in terms of transmission or reflection at all wavelengths; it will instead be tailored at one wavelength, probably about mid-band. This graded modification was quite new at the time, but worked well, and we now employ it for other sensors to optimize performance."

Commercial benefits
Exploitation of the advances made during the extended development cycles of planetary missions, of the kind noted by Suske for e2v coating technology, is something all contractors value.

Ocean Optics has continued to work closely with NASA and other space agencies. Morris indicated that the company contributed to projects including "monitoring of the plume of reentry rockets used in space flight, monitoring of the surface of the moon, and all sorts of other applications that advance science generally, if not in space exploration specifically."

The laser source designed by Thales has, as yet, not found a direct follow-up commercial application. "We tried to adapt this laser to Earth applications, since LIBS is very common and can be useful," commented Durand. "The problem is that the price of this laser is quite high and has proved to be very difficult to reduce. We found some strong internal synergies within Thales for the advances that we had made, but the product itself has remained a specialized space-application laser. Even so, we are of course extremely proud to have successfully contributed to the effort of landing this particular LIBS system on Mars."