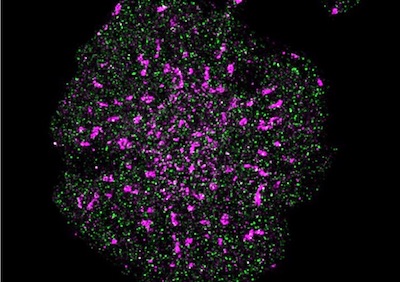 A microscopy platform able to localize single-molecule emitters with ultrahigh precision has allowed direct measurement of the distance between molecules in intact cells, on a scale between 1 and 20 nanometers.

Developed by a team based at the University of New South Wales (UNSW) and christened feedback single-molecule localization microscopy (Feedback SMLM), the system could meet the need for a microscope that achieves ultrahigh localization precision in heterogeneous biological environments. The research was reported in Science Advances.

The work represents a further evolution of super-resolution microscopy techniques, which have already provided new perspectives on biological processes and which won the 2014 Nobel Prize in Chemistry.

Although super-resolution methods have observed and tracked individual molecules, the interactions between these molecules occur at a scale at least four times smaller than that resolved by existing techniques.

"The reason why the localization precision of single-molecule microscopes is around 20 to 30 nanometers normally is because the microscope actually moves while we are detecting that signal," said Katharina Gaus, head of UNSW's Single Molecule Science initiative.

"This leads to an uncertainty. With existing super-resolution instruments, we can't tell whether or not one protein is bound to another protein because the distance between them is shorter than the uncertainty of their positions."

UNSW tackled the problem by building autonomous feedback loops inside a single-molecule microscope, loops which can both detect and re-align the optical path and stage, so as to capture molecular emissions in a complex and unknown cellular environment with equal probability and high precision.

The project then combined Feedback SMLM with a technique called DNA-PAINT, a super-resolution variant similar to STORM microscopy in which transient binding of dye-labeled oligonucleotides creates the short flashes of light needed for stochastic super-resolution microscopy.

"By recording high-quality raw data with ultrahigh localization precision and increased accuracy, we can determine separation distances directly without resorting to post-acquisition processing including drift correction, grouping, filtering, averaging, or summation," commented the project in its published paper.

Elegant solution to a major problem

The feedback corrections incorporated into the platform are key to the project's success. They include a feedback loop between the sample and stage position which does not depend on the density or distribution of fluorophores, but instead uses 3-micron polystyrene beads outside the camera's direct field of view as reference markers for the position of the stage in x, y and z-directions. Another control mechanism involves an autonomous optical feedback loop in the emission path, to minimize image drift and remove the need for subsequent correction.

In tests, the technique was used to perform direct distance measurements between signalling proteins in T cells, and investigate the hypothesis that these immune cells remain in a resting state when the T cell receptor is next to another molecule, which acts as a brake.

The microscope was able to show that in activated T cells these two signalling molecules are indeed separated further from each other, effectively releasing the brake and switching on receptor signalling. These measurements represent the highest-resolution measurement of T cell receptor triggering, according to the team.

"Conventional microscopy techniques would not be able to accurately measure such a small change, as the distance between these signalling molecules in resting T cells and in activated T cells only differed by 4 to 7 nanometers,” said Gaus.

"It's a really simple and elegant solution to a major imaging problem. The feedback mechanisms effectively mean we just built a microscope within a microscope, and all it does is align the main microscope. That the solution we found is simple and practical is a real strength, as it would allow easy cloning of the system and rapid uptake of the new technology."