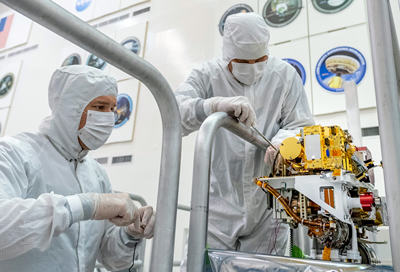 Engineers at NASA's Jet Propulsion Laboratory in Pasadena, California, have installed the SuperCam Mast Unit onto the Mars 2020 rover. The instrument's camera, laser and spectrometers are specified to identify the chemical and mineral makeup of targets as small as a pencil point from a distance of more than 6 meters (20 feet).

SuperCam is a next-generation version of the ChemCam instrument operating on NASA's Curiosity Mars rover. It has been developed jointly in the U.S., France and Spain. Once France delivered the last piece of flight hardware, the instrument was fully integrated on the Mars 2020 rover at the end of June, 2019, in the Spacecraft Assembly Facility's High Bay 1 clean room at JPL.

"SuperCam has come a long way from being a bold and ambitious idea to an actual instrument," commented Sylvestre Maurice, the SuperCam deputy principal investigator at the Institut de Recherche en Astrophysique et Planétologie in Toulouse, France. "While it still has a long way to go — all the way to Mars — this is a great day for not only SuperCam but the amazing consortium that put it together."

Mars 2020 scientists will use SuperCam to examine Martian rocks and soil, seeking organic compounds that could be related to past life on Mars.

"SuperCam's rock-zapping laser allows scientists to analyze the chemical composition of its targets," said Soren Madsen, the payload development manager at JPL. "It lets the Mars 2020 rover conduct its cutting-edge science from a distance."

Also to be installed in the next few weeks is Mars 2020's Sample Caching System, which includes 17 separate motors and will collect samples of Martian rock and soil that will be left on the surface of Mars for return to Earth by a future mission. 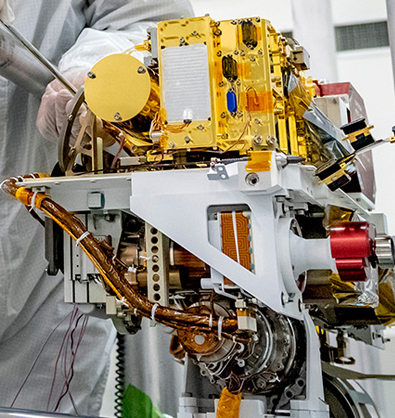 Detail of the SuperCam instrument.

NASA will use Mars 2020 and other missions, including to the Moon, to prepare for human exploration of the Red Planet. The agency plans to establish a sustained human presence on and around the Moon by 2028 through NASA's Artemis lunar exploration plans.

SuperCam is led by Los Alamos National Laboratory in New Mexico, where the instrument's Body Unit was developed. That part of the instrument was installed in the body of the rover in May and includes several spectrometers, control electronics and software.

The Mast Unit was built with contributions from numerous academic laboratories in France, led by the French space agency Centre National d'Études Spatiales, and includes the high-powered laser, a telescope, a camera, an infrared spectrometer and a microphone. Calibration targets on the rover deck are provided by Spain's University of Valladolid.

Send your name to Mars

JPL is building and will manage operations of the Mars 2020 rover for the NASA Science Mission Directorate at the agency's headquarters in Washington. If you wish to send your name to Mars, you can do so until Sept. 30, 2019. Add your name to the list and obtain a souvenir boarding pass to Mars here.